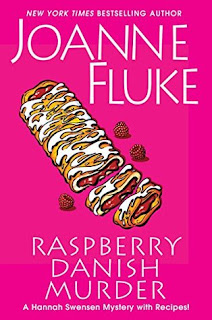 Goodreads synopsis:
Thanksgiving has a way of thawing the frostiest hearts in Lake Eden. But that won’t be happening for newlywed Hannah Swensen Barton—not after her husband suddenly disappears . . .

Hannah has felt as bitter as November in Minnesota since Ross vanished without a trace and left their marriage in limbo. Still, she throws herself into a baking frenzy for the sake of pumpkin pie and Thanksgiving-themed treats while endless holiday orders pour into The Cookie Jar. Hannah even introduces a raspberry Danish pastry to the menu, and P.K., her husband’s assistant at KCOW-TV, will be one of the first to sample it. But instead of taking a bite, P.K., who is driving Ross’s car and using his desk at work, is murdered. Was someone plotting against P.K. all along or did Ross dodge a deadly dose of sweet revenge? Hannah will have to quickly sift through a cornucopia of clues and suspects to stop a killer from bringing another murder to the table . . .

When this book starts, Ross is already missing/left/whatever. I am sure all the Team Mike and Team Norman fans are cheering hoping for his demise. But instead of Ross turning up murdered, his cameraman P.K. is the one who bites the dust. I find this sad, really. He was a great character that I liked a lot and hoped would be a good fit with Hannah’s sister, Michelle. This is showing me that Fluke is slowly drawing us away from the TV station setting and moving mainly back into Lake Eden, Minnesota. I have read some books after this one and have noticed the trend. Fluke is making us not so invested in the TV station by the death of P.K. I am sure it will be replaced by other settings of equal interest in other books.

The main cast is as fun-loving as they ever have been and most of the minor players show up at one time or another. I can’t always say this is the case in a Fluke mystery. It is nice to see the town so full for a change.

The name dropping of all the recipe titles is really noticeable in this book compared to most others. I am not sure if I were speaking about a cookie I was making would refer to the complete title of the cookie, bar, whatever. I would just say “check out this oatmeal cookie I made with a splash of lemon. Good, right?”

Looking back on this book after reading future books after this one, I wonder about Ross’s motives as to why he left Hannah all that money. I know Fluke was setting this up for a future plotline but it seems like a normal person might not take these particular actions. It is sometimes hard to remember these are not real people and are instead book characters.

As for the whodunit, the plot keeps you guessing until the bitter end. You will have to have some foresight to figure this one out. Definitely one of my favorite books from the series. I am not a big Ross fan so having him absent for this one made me happy.