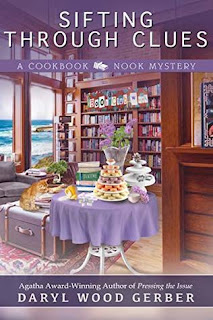 Kindle Edition, 364 pages
Published April 23rd 2019 by Beyond the Page

Goodreads synopsis:
The Agatha Award–winning author of Wreath Between the Linesreturns to the Cookbook Nook, where culinary mysteries are giving everyone food for thought . . .

Book clubs from all over have descended on Crystal Cove to celebrate the library’s Book Club Bonanza week, and Jenna Hart has packed the Cookbook Nook with juicy reads and tasty cookbooks. But she’s most excited about spending an evening with the Mystery Mavens and their moveable feast, when they will go from house to house to share different culinary treats and discuss the whodunit they’re all reading. It’s all good food and fun for the savvy armchair detectives, until one of the members of the group is found murdered at the last stop on the tour.

As if that weren’t enough to spoil her appetite, Jenna discovers that all the evidence points to her friend Pepper as being the guilty party. And with Pepper’s chief-of-police daughter too close to the case to be impartial, Jenna knows she’ll have to step in to help clear her friend’s name before a bitter injustice sends her to jail. Sifting through the clues, Jenna unearths any number of possible culprits, but she’ll have to cook up a new way to catch the killer before Pepper’s goose is cooked . . .

This is my first journey into the town of Crystal Cove and meeting their residents. This book literally starts off with a bang as one of the store owners participating in Bonanza Week is found dead. There was no one in this book who was particularly unliked or assumed to be suspect number one in the beginning. That is what made this whodunit a bit harder to figure out. You spend your time dissecting all the motives of the residents as to who could have or did commit this crime. People who like to figure these things out ahead of time will find themselves stumped until more glaring evidence is put forth.

The main character does a lot of red herring revealing, getting the reader to veer off into a new direction they didn’t at first intend to take. She is very good at that. I felt like in a true murder investigation Cinnamon would have been removed from the case since her mother ended up being suspect number one for so long. She does disappear for a good chuck of the book and when characters try to text her to get an update on the case, her phone is silent.

I found myself weaving in and out as to whom I thought could commit such a crime. The revealing at the end was quite enlightening. I liked how the author chose to set up the motives of the true killer. Classic. Pay attention to all the clues and you might just figure it all out before the ending.

Just a nice, classy cozy mystery to read on a rainy day to keep the blues away. Check this one out. You won’t be disappointed.

Agatha Award–winning and nationally bestselling author Daryl Wood Gerber is the author of the Cookbook Nook Mysteries, the French Bistro Mysteries, the Cheese Shop Mysteries (as Avery Aames), and stand-alone suspense thrillers. Little known facts about Daryl are that she’s jumped out of a perfectly good airplane, has hitchhiked around Ireland by herself, and has appeared on an episode of Murder, She Wrote. She loves to read, cook, and golf, and has a frisky Goldendoodle named Sparky who keeps her in line!
Posted by Toni at 9:48 AM