Something Read, Something Dead by Eva Gates 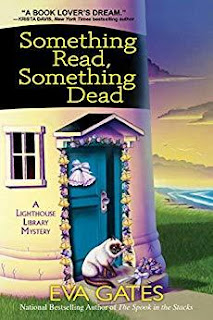 Something Read, Something Dead
(Lighthouse Library Mystery #5)
by Eva Gates

But to their horror, Josie's imperious grandmother, Gloria, descends with the “Louisiana Mafia”: a gaggle of aunts and cousins who intend to take control of the wedding plans. Gloria doesn't do small and simple, and cousin Mirabelle has her own ideas for Josie's wedding, something grand and lavish—and paid for by Josie's parents, of course—that will kickstart her fledgling event planning business and get her work shown on the covers of wedding magazines. To make matters worse, Mirabelle focuses her full Southern charm on the prospective groom…and Jake doesn't seem entirely adverse to her attentions.

To smooth the waters, Lucy hosts a bridal shower at the Bodie Island Lighthouse Library. But it turns deadly when Mirabelle collapses—soon after eating the gluten-free treats Josie prepared specifically for her. Now, to save her favorite cousin from prison, Lucy will have to bring a crook to book in this fifth festive Lighthouse Library mystery from national bestselling author Eva Gates.

When I first started this book, I was worried. It wasn’t starting as greatly as I had anticipated it to be. But luckily the slow beginning was an anomaly. It got much better from then on. I think the main problem I had was that I had not read any previous books in this series so I was reeling a bit trying to get my mind around who was who. Then at some point about a third of the way through, BAM, I was there in the sweet spot and everything was making sense in my brain.

The mystery was well-crafted and the characters were interesting. If someone hadn’t killed Mirabelle, I’m afraid I would have. Now, there is a character you love to hate. it’s almost too bad she’s dead. She has soap opera uber villain written all over her. I really had no idea who the killer was until it was figured out by the main character.

Just an all over good book. Check it out cozy mystery fans.