The Eighth Sister by Robert Dugoni 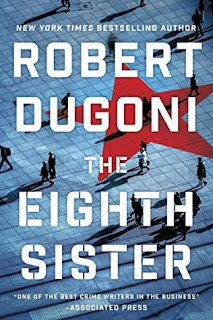 Goodreads synopsis:
Robert Dugoni is the author of the bestselling Tracy Crosswhite series. He won the 2015 Nancy Pearl Award for Fiction and has written over 15 novels and short stories including The Extraordinary Life of Sam Hell and The Eighth Sister.

Amazon Synopsis:
A pulse-pounding thriller of espionage, spy games, and treachery by the New York Timesbestselling author of the Tracy Crosswhite Series.
Former CIA case officer Charles Jenkins is a man at a crossroads: in his early sixties, he has a family, a new baby on the way, and a security consulting business on the brink of bankruptcy. Then his former bureau chief shows up at his house with a risky new assignment: travel undercover to Moscow and locate a Russian agent believed to be killing members of a clandestine US spy cell known as the seven sisters.
Desperate for money, Jenkins agrees to the mission and heads to the Russian capital. But when he finds the mastermind agent behind the assassinations—the so-called eighth sister—she is not who or what he was led to believe. Then again, neither is anyone else in this deadly game of cat and mouse.
Pursued by a dogged Russian intelligence officer, Jenkins executes a daring escape across the Black Sea, only to find himself abandoned by the agency he serves. With his family and freedom at risk, Jenkins is in the fight of his life—against his own country.

I have to admit I was a little confused by this one most of the way through it. I understood what was happening but what I didn’t get was why everyone was pursuing him so diligently across Russia. As far as I could tell, no true intel passed through his hands. It was just like he went over there told them about something they didn’t want or accept and suddenly he is on the run for his life. I knew there had to be more to all this. It felt like a set up from the get-go.

A Russian asset working for the CIA, one of the “seven sisters” women trained from when they were young to be CIA assets working in high level positions in the Russian government and passing intel to the USA, killed herself in order for Jenkins to escape. And I wondered if the whole sacrifice was really worth it. What did she kill herself for really? Jenkins’s life?

The most interesting part of this book didn’t happen until Jenkins finally made his way back to the US. His enemies were closer than he knew. The latter half of the book made up for all the uncertainty at the beginning.

I thought this book was good. Very good. The part in the courtroom especially telling. Not as intense as it could have been, but decent. I particularly liked the ending.

If you are looking for a good spy thriller, check this one out.

I received this as an ARC (Advanced Reader Copy) in return for an honest review. I thank NetGalley, the publisher and the author for allowing me to read this title.
Posted by Toni at 11:44 AM