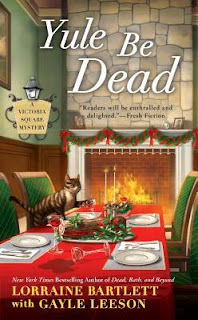 Goodreads synopsis:
A Christmas crime shocks the merchants of a quaint shopping district in this latest installment of The New York Times bestselling Victoria Square series.

It's Christmastime, but not everyone is jolly--especially not Vonne Barnett. Her dead body has been found in Victoria Square. Katie Bonner, the manager of Artisan's Alley, happens to be at the tea shop Vonne's mother, Francine, owns when the news is delivered.

Vonne left a trail of men behind her so the suspects are many--but the clues are few. A broken teacup leads Katie to one of the suspects, but before she can investigate, she's attacked. Katie may be closing in on a murderer, but time is ticking because the murderer is definitely closing in on her.

I was excited to dive into this book. Who doesn’t love Christmas and add to that the Dickens-theme the Artisan’s Alley had and the atmosphere was set for success. This book started out so good. I was into it.

Then somewhere in the middle I lost interest.

I didn’t care who had killed Vonne. I was more interested in the “ is she going to buy Afternoon Tea” and “will Margo kill her before the end of the book.” Margo is her dead husband Chris’s mother. (I think it was husband. Now I am second guessing myself.) I am not sure I could have put up with margo as long as Katie did.

I really enjoyed some of the characters in this. Ray was my favorite. I kept imagining him as this guy from my church around the same age with surprisingly the same name. I was just meh about Andy and that Ericka chick could have just been a relationship red herring. I don’t think she was interested in Andy just a convenient plot stumbling point. I hope there is more about this Andy/Ray rivalry and that would make the book pop a but more.

I thought this book was good, not great. If you are just in it for the mystery, it is just so-so and like I said with Andy, it just left me “meh.” I could take it or leave it. Not horrible, though. I have read better. I will try Lorraine Bartlett again and see how her other books strike me.

I bought this book with my own money.
Posted by Toni at 7:46 AM