A Story to Kill (Cat Latimer Mystery #1) by Lynn Cahoon 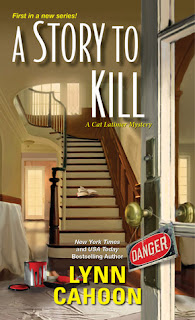 A Story to Kill
(Cat Latimer Mystery #1)
by Lynn Cahoon

Goodreads synopsis:
Former English professor Cat Latimer is back in Colorado, hosting writers' retreats in the big blue Victorian she's inherited, much to her surprise, from none other than her carousing ex-husband. Now it's an authors' getaway, but Cat won't let anyone get away with murder . . . The bed-and-breakfast is open for business, and bestselling author Tom Cook is among its first guests. Cat doesn't know why he came all the way from New York, but she's glad to have him among the quirkier-and far less famous-attendees. Cat's high school sweetheart Seth, who's fixing up the weathered home, brings on mixed emotions for Cat . . . some of them a little overpowering. But it's her uncle, the local police chief, whom she'll call for help when there's a surprise ending for Tom Cook in his cozy guest room. Will a killer have the last word on the new life Cat has barely begun?

After reading book four in this series, I had to start at the beginning and binge read the series from book one. And I was not disappointed. This book is a fantastic beginning. Love Uncle Pete, resident police man always available to come to Cat’s rescue when high school sweetheart, Seth isn’t available. From Shauna her co-partner in the Writer’s Retreats to Pete and Seth, this lady is protected on all sides when danger rears its ugly head. And it does so quite frequently.

I only had two niggles with this book, I thought the murder happened a bit too soon after everyone arrived. And the manuscript best selling author, Tom Cook, was writing should have been finished by his wife Linda after his death. Besides that, I have nothing bad to say about this book. I got invested in the series in book four and book one only made that feeling intensify ten fold. I am already reading book two in the series, Fatalities and Firelight and purchased book three last night, Of Murder and Men.

Nearly everyone who attended the retreat was pulled into some type of mystery throughout the book. I kept thinking the smarmy William Williams would steal Tom Cook’s book idea after his death since he kept harping that Tom had stolen his idea for his first best selling novel. I am just sorry we didn’t get to experience Tom Cook more in the book considering how much crap swirled around the man after his death. It was no wonder he was a writer with so much fodder to wade through each day. Lots of material to draw from.

Great series. Highly recommend. All the stars from me I can give. High 5!

I purchased this book with my own money.
Posted by Toni at 9:29 AM