The Woman Next Door by Sue Watson 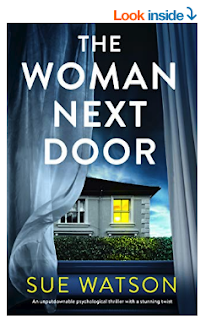 The Woman Next Door
previously titled: All Her Secrets
by Sue Watson

Goodreads synopsis:
I suppose everyone has regrets, wonders what if? People all have their reasons for living here. Who knows what lies behind the pretty curtains and the well-groomed lawns of Mulberry Avenue?
Lucy has a lovely husband, a job she adores as a teacher, and a house on Mulberry Avenue that she’s decorated just the way she wants – from the floaty curtains and the softest bed linen, right down to the perfectly-chosen velvet cushions on their comfortable sofa. Life isn’t perfect, but it’s pretty close.

She’s also got Amber. Her newest friend and neighbor. They’ve got so much in common. Even if Amber’s life sometimes seems a lot more glamorous and exciting, she shares Lucy’s down-to-earth sense of humor, and Amber seems so interested in Lucy and her life, it’s like they never run out of things to talk about.

But then Amber starts acting strangely, claiming her life isn’t all it seems, talking about how she thinks she might be pregnant, and confiding in Lucy that she’s started getting threatening messages.

She’s scared, and the only person she can turn to is Lucy. She wants to stay at Lucy’s house until things calm down.

Lucy wants to protect her friend. But can she really trust Amber? Because sometimes other people are not all that they seem. Sometimes they have secrets. And they’d do anything to keep them…

This book was unputdownable. Misery meets Single White Female with a twist.

I have read books by Sue Watson before and among the many volumes I have read over the years, her stories still stick in my mind. The previous books were unlike this one. They were chick lit. Soft and airy. Fun. Nothing like this book. This is hard core psychological stuff. Top rate.

Halfway through there was a question if there really was a stalker or Amber had been making it all up. I was rooting for a stalker because Amber was such a nasty woman. I wonder how such people get away with stuff like she did. I was rooting for the bad guy. Not her but the one after her.

When the tables turned and the surprise happened, I was like “what the?” “OMG! What a jerk.” I don’t want to give too much away because the unfolding of the story is where the fun of the story lies.

About three-fourths through the chapters changed from a mostly Lucy POV to an Amber POV. There was also what I assumed was the stalker POV thrown in here and there just to mix it up a bit.

I felt vindicated at the end but I wish Lucy would have done a bit more to make everyone know she wasn’t at fault. You know she isn’t the stalker going in so I am not spoiling anything. We see most of the story through her eyes. She had a somewhat obsession with Amber because she was there for her on the tv screen when she was a kid growing up and offering kind tidbits on the evening news. It’s too bad Amber turned out to be not what Lucy suspected she was.

You need to read this book if you like thrillers. I have already picked up the other thriller Watson has written since I liked this one so much. Wonderful stuff. My highest rating.

I received this as an ARC (Advanced Reader Copy) in return for an honest review. I thank NetGalley, the publisher and the author for allowing me to read this title.
Posted by Toni at 8:31 AM