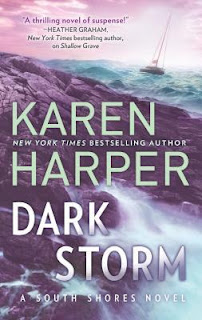 Goodreads synopsis:
There are some forces you can't outrun... Forensic psychologist Claire Markwood has experienced her share of disaster. But nothing could prepare her for her sister, Darcy, going missing. Claire rushes to the butterfly sanctuary where Darcy has been working, prepared to do what she does best--work the clues. But her sister, along with her car and some of the sanctuary's rarest species of butterflies, has seemingly vanished without a trace.Amid a flurry of mysterious leads and dead ends, Claire and her criminal lawyer husband, Nick, tap every resource at their disposal. But the deeper they dig, the more unsettling the case becomes, dredging up old family secrets that shake the foundation of everything Claire thought to be true. Because some secrets aren't just threatening--they're deadly.

This is the sixth book and finale of the South Shores series. And unfortunately for me the first book I have read in the series. Nothing like coming in on the series finale.

Claire has quite a lot going on in this book. Her sister has mysteriously disappeared and left her phone in an unusual location. Her daughter has started her unusual obsession with her doll again… the obsession where the doll talks for her. And then a new doll shows up, one that is eerie and filled with what I can only imagine is artificial intelligence technology. Imagine Alexa or Siri in a baby doll. Right off the bat I contemplated if the small daughter had something to do with her aunt’s disappearance. Now that would have been a strange twist. There is also a threat of a big storm coming on the horizon. Think Hurricane Katrina. Lots of story potential here.

Some of the revelations seemed forced and where the author lead us is exactly where the plot went. Not a lot of red herrings here, I felt a little disappointed in that. With so much potential in the setting I was surprised that the author didn’t surprise me with where the plot was going.

There weren’t as many gasping bombshells as I thought there should be in a book of this genre. I anticipated the whole cryogenic plotline the moment the man said he wanted his brother’s head. I mean, why else would you want such a thing?

Even though the book was entertaining and well written, I wanted more. I have pushed off many of Harper’s books assuming them to be more scary than this. I will indeed dive into other books in her list and see how they fare against this one.

I received this as an ARC (Advanced Reader Copy) in return for an honest review. I thank NetGalley, the publisher and the author for allowing me to read this title.
Posted by Toni at 7:01 AM