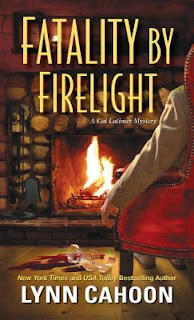 Goodreads synopsis:
Cat Latimer’s Colorado bed-and-breakfast plays host to writers from all over. But murder is distinctly unwelcome . . .

To kick off a winter writing retreat, Cat and her handyman boyfriend, Seth, escort the aspiring authors to a nearby ski resort, hoping some fresh cold air will wake up their creative muses. But instead of hitting the slopes, they hit the bar—and before long, a tipsy romance novelist named Christina is keeping herself warm with a local ski bum who might have neglected to tell her about his upcoming wedding.

Next thing Cat knows, her uncle, the town sheriff, informs her that the young man’s been found dead in a hot tub—and Christina shows up crying and covered in blood. Now, between a murder mystery, the theft of a rare Hemingway edition, and the arrival of a black-clad stranger in snowy Aspen Hills, Cat’s afraid everything’s going downhill

Another murder has occurred during one of Cat Latimer’s writing retreats. Suspect number one is the young girl who writes the sweet romances. She had taken off with one of the local boys to a bar earlier in the day and when the night came she was so naive she thought he had her best interest at heart. He didn’t. He wanted the one thing she wouldn’t give him. And after she left he somehow ended up dead and she didn’t make it home until after 3am.

I almost feel like I am just visiting a great television series that I love watching each week. It is just a homey experience reading this series. I thought Cahoon’s Tourist Trap series was great, but this one is almost edging into first place for me. Love it. The characters are very consistent and the always changing retreat guests keep the mystery interesting.

I almost wish Cahoon would put some writing wisdom at the end of these books for any aspiring writers out there because this series is indeed inspiring to the writer in us all.

The emergence of the character of Dante and the continuing mystery of Micheal are keeping my interest peeked and I look forward to when we discover what is really behind why Michael forced Cat to divorce him to protect her. If Michael ends up really alive, I wouldn’t be surprised in the least. Talk about a great plot twist that would be.

This book would appeal to anyone who loves a mystery or likes to read about writing. Highly recommended.

I purchased this book with my own money.
Posted by Toni at 7:29 AM