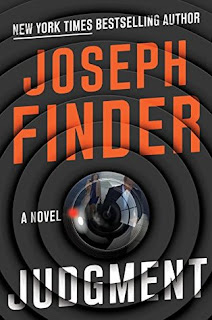 Goodreads synopsis:
New York Times bestselling author Joseph Finder returns with an explosive new thriller about a female judge and the one personal misstep that could lead to her--and her family's--undoing.

It was nothing more than a one-night stand. Juliana Brody, a judge in the Superior Court of Massachusetts, is rumored to be in consideration for the federal circuit, maybe someday the highest court in the land. At a conference in a Chicago hotel, she meets a gentle, vulnerable man and in a moment of weakness has an unforgettable night with him. They part with an explicit understanding that this must never happen again.

But back home in Boston, it becomes clear that this was no random encounter. The man from Chicago proves to have an integral role in a case she's presiding over--a sex-discrimination case that's received national attention. Juliana discovers that she's been entrapped, her night of infidelity captured on video. Strings are being pulled in high places, a terrifying unfolding conspiracy that will turn her life upside down.  But soon it becomes clear that personal humiliation, even the possible destruction of her career, are the least of her concerns, as her own life and the lives of her family are put in mortal jeopardy.

In the end, turning the tables on her adversaries will require her to be as ruthless as they are

One of the last books I read by Joe Finder was Paranoia. And if you haven’t read it… go read it. It is wonderfully gripping and it really does have you looking over your own shoulder. I was working in a similar environment at the time and frankly, the book just freaked me out. I love Finder’s writing but going back into such a setting took me awhile. I have read other Finder books but none shook me as much as that one.

On to this title… this was is comparable to Paranoia in freak you out action and suspense. There isn’t just one big buildup in this book. It just keeps happening over and over.

This book is set in the justice system in Boston. Juliana Brody is randomly given a case that on the surface seems to be a sexual harassment/ unlawful firing suit. But it is so much more than that. When the judge’s first ever one night stand shows up in court, you know that things are about to explode. And the tension just keeps building from there. People die, people are horribly beaten and you wonder what in the heck is really going on here.

I couldn’t put this book down. I had to know why it all was happening. And if our justice system is really this f-ed up, Lord help us all. I marveled at how easily Finder moved from knowing about the justice system to spies, espionage, etc. The man has done his homework. Either that or he used to be a spy in another life.

This book floored me and I recommend it to anyone who loves thrillers. Highly recommended.

I received this as an ARC (Advanced Reader Copy) in return for an honest review. I thank NetGalley, the publisher and the author for allowing me to read this title.
Posted by Toni at 8:01 AM