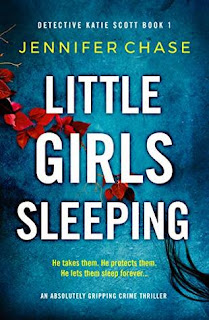 Goodreads synopsis:
He looked down at the little girl, sleeping peacefully, her arms wrapped around a teddy bear. He knew he was the only one who could save her. He could let her sleep forever.

An eight-year-old girl, Chelsea Compton, is missing in Pine Valley, California and for Detective Katie Scott it’s a cruel reminder of the friend who disappeared from summer camp twenty years ago. Unable to shake the memories, Katie vows she won’t rest until she discovers what happened to Chelsea.

But as Katie starts to investigate, the case reveals itself to be much bigger and more shocking than she feared. Hidden deep in the forest she unearths a makeshift cemetery: a row of graves, each with a brightly coloured teddy bear.

Katie links the graves to a stack of missing-persons cases involving young girls—finding a pattern no one else has managed to see. Someone in Pine Valley has been taking the town’s daughters for years, and Katie is the only one who can stop them.

And then another little girl goes missing, snatched from the park near her home.

Katie’s still haunted by the friend she failed to protect, and she’ll do anything to stop the killer striking again—but can she find the little girl before it’s too late?

Great beginning to a new series. Compelling and just wonderful. What a roller-coaster ride!

The characters were really compelling in this. I hated Templeton. What a jerk. I was happy to see the conclusion of that storyline thread manifested at the end. The fact that Katie had been assigned the title of Detective seemed to tick off most of the police force in Pine Valley. Not to mention that the Sheriff was her uncle.

Lots of attacks happened to Katie throughout the book and in the beginning I wondered if Templeton was behind it all. Katie came across the bodies of the dead girls and the original team on the police force resented the fact that she one-upped them by the discovery.

The character of Katie was very detailed oriented person, with a military background and I think she made the killer nervous. I wondered why the killer hadn’t gone after the original police detectives on the case but I guess that is a mute point.

When the killer kidnaps Katie at the end, there is a whole what I call a Murdock moment. On the series, MacGyver, there is a villain named Murdock who never seems to die no matter the over the top ways he seems to meet his supposed end.  The killer did that here too and I wonder if he might return in a future book to torment Katie.

Highly recommended. A wonderful first book for an author I will follow in the future!

I received this as an ARC (Advanced Reader Copy) in return for an honest review. I thank NetGalley, the publisher and the author for allowing me to read this title.
Posted by Toni at 7:58 AM