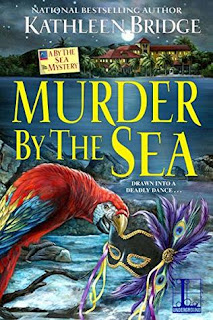 Goodreads synopsis:
When a murderer crashes a masquerade ball, it's up to Liz to unmask the killer . . .

It's been quite a year for novelist Liz Holt. She's overcome a lot and is finally feeling at peace with her new life at her family's hotel, the Indialantic by the Sea, on the beautiful barrier island of Melbourne Beach, Florida. She's exactly where she needs to be to ring in the New Year at the Florida Writes Literary Masquerade Ball.

But when her ex-boyfriend surprises her at the ball, she can't disguise her anger, and the two engage in a very public argument. Naturally, after her ex is found dead on the hotel grounds, shot through the heart, Liz tops the suspect list. With the help of family and friends, she needs to clear her name before the real killer waltzes away scot-free . . .

This is book three in the By The Sea Mystery series.

This is my first foray into the By The Sea series and I thought it was decent. Good. Nice mystery. Nice twists.

The story starts out at a Masquerade Ball. So, since I didn’t know who anyone was anyway, this didn’t particularly bother me. But I can see how it would be difficult to pair costume to character once the real mystery started unfolding.

I had a hard time getting into this one. I didn’t feel it got its sea legs until about three-fourths into the book. I did a lot of re-reading since I seemed to zone out in some of the parts I needed to pay attention to. Once it got going it was good. I liked the characters. I wanted to root for them and I did somewhat.

Text flow was nice and storyline interesting. The mystery wasn’t as complex of some I’d read lately but it really did keep you guessing. I think all the costumes in the beginning made it a bit more difficult to target the real murderer.

Nice story. Decent. A good read to take to the beach one day when you want a quick read.

I received this as an ARC (Advanced Reader Copy) in return for an honest review. I thank NetGalley, the publisher and the author for allowing me to read this title.
Posted by Toni at 8:16 AM