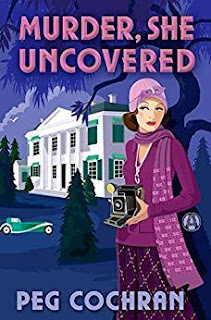 Goodreads synopsis:
An intrepid 1930s Manhattan socialite uncovers deadly secrets during an assignment to the Hamptons in this riveting historical cozy mystery for readers of Victoria Thompson, Anne Perry, and Rhys Bowen.

Westhampton, 1938. To the dismay of her well-to-do family, Elizabeth “Biz” Adams is quickly establishing herself as a seasoned photographer over at the Daily Trumpet. Growing more confident in her decision to pursue a career, Elizabeth is thrilled when she and her reporter sidekick, Ralph Kaminsky, are sent to Long Island to cover the story of a young maid found dead in one of the glamourous summer homes in the devastating aftermath of the Great New England Hurricane—also known as the Long Island Express.

At first it’s assumed that the young woman was caught in the terrible storm, but when a suspicious wound is found on the side of her head, the police suspect murder. The maid’s death becomes even more tragic when it’s discovered she was pregnant, and with Elizabeth and Kaminsky at the scene of the crime, the Daily Trumpet scoops all the other papers in town.

The young woman’s boyfriend emerges as the likeliest suspect. But as Elizabeth follows the story, she begins to wonder whether someone in the household of the maid’s employers might be responsible—someone who’ll stop at nothing to keep the truth about the baby’s paternity hidden. . .

This is the second book of the Murder, She Uncovered series set in 1930’s Westhampton, Long Island, New York. Elizabeth “Biz” Adams is a high society gal who prefers to work even thought every other lady of her nature is not. Working isn’t a thing that is done by a lady back then. They are of society. It is above them. Elizabeth is a photo-journalist at the Daily Trumpet working along side Ralph Kaminsky, a seasoned reporter who is afraid budget cuts might lose him his job.

There is a lot going on in this book. A couple of different murders occur, guys stepping out on gals, gals causing trouble for other gals, a murder made to look like a suicide, the gamut. Elizabeth takes everything in stride taking pictures of a women pushed from a window lying dead on the pavement to a priest tied up as if he had killed himself. She is one gutsy lady. I am not sure I would have taken such photos even today.

The mystery is engaging and she and Kaminsky follow every lead they come across. Elizabeth provides quite a few insights that the duo follow. The police are not stupid in this series either. She finds herself in a quandary when her mother wants her to marry Phillips who is a man of her society standard and she would rather hang out eating pizza with Detective Sly Marino. I was surprised how looked down upon the police were at that time in the 1930’s. I felt bad for Marino. He seemed a standup guy just looking to solve his cases and find love with Elizabeth.

The ending was sweet and the mystery solved to a surprising conclusion. I liked the whodunit of it all. Following the duo around was fun and entertaining. I will definitely pick up book one in this series and add Peg Cochran books to my TBR.

I received this as an ARC (Advanced Reader Copy) in return for an honest review. I thank NetGalley, the publisher and the author for allowing me to read this title.
Posted by Toni at 6:59 AM