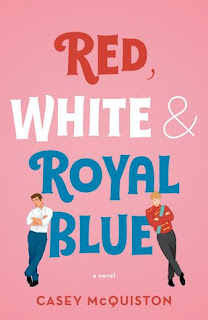 Goodreads synopsis:
A big-hearted romantic comedy in which First Son Alex falls in love with Prince Henry of Wales after an incident of international proportions forces them to pretend to be best friends...

First Son Alex Claremont-Diaz is the closest thing to a prince this side of the Atlantic. With his intrepid sister and the Veep’s genius granddaughter, they’re the White House Trio, a beautiful millennial marketing strategy for his mother, President Ellen Claremont. International socialite duties do have downsides—namely, when photos of a confrontation with his longtime nemesis Prince Henry at a royal wedding leak to the tabloids and threaten American/British relations.

The plan for damage control: staging a fake friendship between the First Son and the Prince. Alex is busy enough handling his mother’s bloodthirsty opponents and his own political ambitions without an uptight royal slowing him down. But beneath Henry’s Prince Charming veneer, there’s a soft-hearted eccentric with a dry sense of humor and more than one ghost haunting him.

As President Claremont kicks off her reelection bid, Alex finds himself hurtling into a secret relationship with Henry that could derail the campaign and upend two nations. And Henry throws everything into question for Alex, an impulsive, charming guy who thought he knew everything: What is worth the sacrifice? How do you do all the good you can do? And, most importantly, how will history remember you?

This is a debut book by Casey McQuiston. And it is a GREAT one!

I am not the normal audience for such a book. But I do like a good love story and that is exactly what is contained in these pages. You root for Alex as he tries to figure out he is bi -sexual and what that means for him since he is the son of a sitting president, the first female president.

I love how the alternate version of Harry, Prince of Wales is portrayed. It is so convincing. You really can get into his head and see how hard it is to be gay and a man in line for the throne of England. Like I said, this is an alternate universe version of Harry. His brother in this book is named Philip and mother, Catherine.  When I started reading this I was so in the mindset of: how did they get permission to print this?

This was a sweet love story. It was sometimes hard to read. You get choked up A LOT. And when it all got outed you wondered how it would ever be made right again. This book was UN-PUT-DOWN-ABLE. It is an awesome book for the spring and summer. And if you are a girl that likes girls or a boy that likes boys, you will love this. I am straight myself and I loved this book. Everyone will fall in love with Harry and Alex no matter what your sexual orientation .

This is one of my favorite books of the year so far. I hope there is a follow up because I’m so totally in. HISTORY Huh? New catchphrase and hashtag of the year.

Read this. You won’t be disappointed.

I received this as an ARC (Advanced Reader Copy) in return for an honest review. I thank NetGalley, the publisher and the author for allowing me to read this title.
Posted by Toni at 8:03 AM