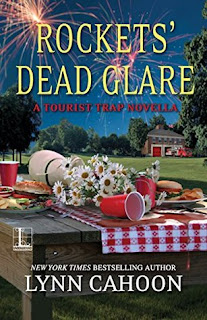 Goodreads synopsis:
As sunny South Cove, California, gears up for their annual Fourth of July celebrations, a local murder threatens to kill the fireworks . . .

South Cove’s local businesses are up in arms after volunteer fire chief Barry Gleason threatens to shut down anyone who doesn’t comply with the fire code. But when Barry schedules a training burn in an old abandoned barn, he is the only one who doesn't come out alive. Jill Gardner—owner of Coffee, Books, and More—smells murder in the ashes. She’ll have to work quickly to nab a killer with a short fuse—or else everyone’s holiday will end with a fizzle . . .

I am not sure why I put off reading this one so long. I think I thought it was a part of one of the two new series Lynn Cahoon was creating. I got thrown off by the image art on the cover, I think. When I finally realized it was a Tourist Trap book and I had somehow missed three entire books (two novellas and one novel) in the series I had to shake my head. This is one of my favorite series; how did I miss it?

This book had so much build up in the beginning. Butthead Barry and his controlling ways was a great murder victim. I wish this had been a full novel. It had the bones for it. Lots of suspects and the fact that Greg and the police force had figured it all so quickly kinda threw me off.

I definitely wanted more of this. It could have been a great full sized novel. Even as a novella it was good but everything happened so fast. And I guess that is a point of a novella truncated everything.

Even though it's small, it's a good read. Check it out.

I received this as an ARC (Advanced Reader Copy) in return for an honest review. I thank NetGalley, the publisher and the author for allowing me to read this title.
Posted by Toni at 7:55 AM