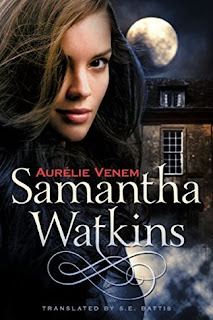 Goodreads synopsis:
Young librarian Samantha Watkins has always been perfectly content with her humdrum existence. Never easily fitting in with anyone anywhere, she feels most at ease in silence, among stacks of books. Sam believes in leaving fantasy and drama to the characters in her beloved novels. But one night when she leaves work late, she finds herself center stage in a tale of vengeance and terror.
Samantha is rescued from a gang of vampires by Phoenix, a mysterious and otherworldly man. Suddenly her paranormal adventures take a far more extraordinary turn than any story she’s ever read. Phoenix, her savior, is actually a vampire as well, tasked with stopping his peers from killing. With no possibility of returning to her former life, Sam becomes his assistant. Together they investigate a series of mysterious disappearances and attempt to save the human race from a horrible fate. Battling vampires thrills and empowers Sam, but where does she stand with supernatural Phoenix? Could Phoenix, through their work together, become a different man?

This book was great but I think it needs a new title. Even though we see the story mostly through Sam’s eyes, it is more a study of the who of Phoenix. Who is he? What is he? How has he lived so long? Why is he so standoffish?

This book reminded me of so many of my favorite vampire shows: Forever Knight and True Blood, plus the mentioning of other series like Stargate SG-1 wanted me to see if this author was taking friend requests because we thought along the same lines. Same interests.

I thought this book was amazing. It really gave me all the feels and I was engaged throughout the entire book. There were only a few of the townspeople who grabbed my interest: Angela and Danny but others seemed to melt into the background.

The thing that I was captivated by was Phoenix himself and the unusual way he responded to things. The abrupt way he was with Sam had me scratching my head but at the same time wanting to know more about him. That last scene of the book where the climax has happened and Sam is bringing Phoenix his phone stabbed me in the heart.

I got a brief glimpse into book two at the end but I see the next three books in the series have not yet been translated into English. I really need to read books 2-4. I wonder how long it would take me to learn French?

I received this as an ARC (Advanced Reader Copy) in return for an honest review. I thank NetGalley, the publisher and the author for allowing me to read this title.
Posted by Toni at 9:26 AM