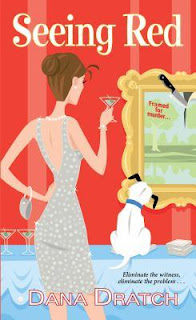 Goodreads synopsis:
If it wasn't for art thieves, spies and killers, Alex Vlodnachek's life would be bliss.

Her freelance career is catching fire. Her relationship with B&B owner Ian Sterling is flirty and fun. She's even attending a glittering cocktail party at his sprawling Victorian inn.

But, to this ex-reporter, something seems "off." And it's not the canaps. When Ian's father vanishes, the enigmatic innkeeper asks for her discretion. And her assistance.

Meanwhile, Alex is having the opposite problem at her tiny bungalow: People keep piling in uninvited. Including a mysterious intruder found sleeping in her kitchen. Her grandmother, Baba, who shows up "to help"--with Alex's own mother hot on her heels.

When the intrepid redhead discovers a body in the B&B's basement and a "reproduction" Renoir in the library, she begins to suspect that Ian is more than just a simple hotel owner.

Can she find the missing man before it's too late? Or will Alex be the next one to disappear?

This is the second book in the A Red Herring Mystery series. Her first book out last year, “Confessions of a Red Herring,” was one of my favorite books of 2018. This book wasn’t quite as thrilling as that one was, but still pretty good.

Alex Vlodnachek is a freelance journalist. Currently, she is working for the competition of her old newspaper writing the Ask Maggie column. But in this book, that isn’t the only thing on her plate. Her brother, Nick is trying to start a new baking business out of her kitchen. Her handsome British neighbor across the way is hiding the fact that his father has mysteriously disappeared. And Alex has stumbled upon not one but TWO dead bodies in the freezer in the B&B’s basement that like Ian’s father keep disappearing.

This book is chock full with so much going on. I almost thought it was a bit too much for one book. In fact, I only realized near the end that what I thought was one couple staying at Ian’s B&B was in fact two different couples. I had fused them together in my mind. I guess to keep the complexity at bay.

I am not sure why Ian didn’t start looking into the why of his father’s disappearance. It was almost assumed that Alex would do that for him. I knew something was fishy with Ian even back in book one when he was high on my suspect list. Plus he and Alex’s mother get along swimmingly. How is that possible? Definitely a distinctly fishy smell at the mysterious B&B.

This was surely a four star book for me. Not as thrilling as book one but a keeper none the less.  I am interested in seeing where the relationship between Alex and Ian goes from here considering the ramifications of the last scene of the book. Intense meltdown imminent, I suspect.