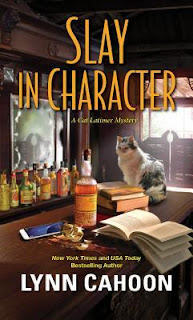 Goodreads synopsis:
Staying in character can be murder when Cat Latimer and the members of her writers' retreat head for a ghost town . . .

Cat and the members of her writers' retreat have just arrived in Outlaw, Colorado, an "Old West" tourist town complete with inhabitants dressed up as famous figures from history. But this authentic slice of Americana takes a murderous turn when a college student masquerading as a 19th-century saloon girl becomes history herself.

Was she the intended target? Or did she take a hit meant for someone else? With a cast of suspects to choose from--including some notorious gunslingers and the sleazy town founders--Cat must unhorse the real culprit before a real-life ghost story is given a killer twist . . .

I did what I always seem to do with new series to me… I started with book four instead of book one. Like I said in my previous review, I am not sure why I put this book off so long, This series sticks to your bones.

The whole “writer’s retreat" aspect sounds very cool and makes me want to join in and write my own little ditty along with all the other cast. Every month when they have a new scheduled meeting they should tag line it: Every retreat begins with murder. It’s like choose your own adventure for authors.

I found it fascinating that someone could buy a dead town and transform it into a money-maker like the town of Outlaw became in this novel. The entire storyline was very convoluted and in many ways I think a good mystery has to have a lot of complexity in it. I like how so many from the retreat are mixed into the mystery as well. It makes it so fun to read the interactions. Since I hadn’t read the other books, the whole Michael-thing was a tad confusing  but now that I am starting from the beginning after finishing this, it makes so much more sense to me now.

It is a great book. The series itself is awesome. Highly recommend. I can’t wait to dig into her Farm to Fork series now. Next on the list for me.

I received this as an ARC (Advanced Reader Copy) in return for an honest review. I thank NetGalley, the publisher and the author for allowing me to read this title.
Posted by Toni at 9:07 AM