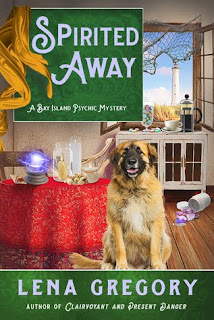 Kindle Edition, 310 pages
Expected publication: May 21st 2019 by Beyond the Page

Goodreads synopsis:
In the new Bay Island Psychic Mystery, psychic Cass Donovan is thrown into the middle of a macabre murder she never saw coming . . .

With the summer tourist season on Bay Island in full swing, shop owner Cass Donovan barely has a minute to breathe, and things at Mystical Musings become even more hectic when a fight breaks out at one of her psychic readings. Shaken by the fracas and discouraged that her sixth sense seems to be on the blink, Cass is even more dispirited to learn that one of the men involved in the altercation was later found dead—and that a close friend of hers is the main suspect.

Desperate to help her friend prove his innocence and consumed by haunting visions, Cass follows the clues from one possible culprit to the next, including some very mysterious tourists and not a few questionable locals. And when the police turn to Cass to help them find out who committed the ghoulish deed, she knows she’ll have to tread carefully, because her next grim premonition may be her last . .

This is the fourth book in the Bay Island Psychic Mystery series.

This series caught my interest from the very first scene and I was engaged and wanting to know more. It was a fun book and reading it made me want to go back and read all the previous books in the series. Even with it being my first foray into this storybook world, I found my way around easily although knowing a bit more about the residents might have been nice.

The whole psychic thing was interesting and I realized there should be more of it in these pages especially notations with tarot cards or other items someone like her might use. That seemed a bit lacking. I almost wanted to title this story: Cass Donovan and the Girl Who Cleans Up. The girl got no sleep in this book and every other chapter she had to get out her mop and scrub away.

I felt the middle plotting got a bit muddled. The red herrings seemed to cross over themselves and I didn’t realize exactly how many off screen suspects we had until nearly the last few chapters.

I thought this was a good book. The mystery could have been better plotted but I found it a fun ride. This would make a good tv series to go along with the Good Witch. I do hope to pick up more books by Lena Gregory. It was a new author for me and I will keep her books in my TBR pile for sure.

I received this as an ARC (Advanced Reader Copy) in return for an honest review. I thank NetGalley, the publisher and the author for allowing me to read this title.
Posted by Toni at 9:31 AM