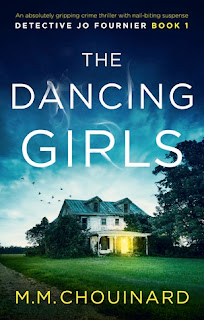 Goodreads synopsis:
The light in her wide brown eyes dimmed as she drew her last breath. She might have been beautiful lying there on the floor, if it wasn’t for the purple marks on her neck and the angry red line on her finger where her wedding band used to be…

When Jeanine Hammond is found dead in a hotel in the picture-perfect town of Oakhust, newly-promoted Detective Jo Fournier is thrown into a disturbing case. Who would murder this shy, loving wife and leave her body posed like a ballerina?

Jo wants to know why Jeanine’s husband is so controlling about money, and where Jeanine’s wedding ring is, but before she and her team can get close to the truth, another woman is found strangled in a hotel, arms placed gracefully above her head like a dancer.

While digging through old case files, Jo makes a terrifying link to a series of cold cases: each victim bears the same strangulation marks. But the FBI won’t take Jo seriously, and if she disobeys direct orders by investigating the killings outside of her jurisdiction, it will mean the end of the career she’s already sacrificed so much for, even her relationship.

Just as Jo is beginning to lose hope, she finds messages on the victims’ computers that make her question whether these small-town women were hiding big lies. Jo thinks this is the missing link between the victims, but she knows the killer is moments away from selecting his next victim. Will it lead her to the most twisted killer of her career in time, or will another innocent life be lost?

An absolutely unputdownable and brilliant new crime thriller series that fans of Robert Dugoni, Lisa Regan and Melinda Leigh will devour in one sitting.

This is the first book in the Detective Jo Fournier series. There wasn’t a ton of getting to know Jo Fournier in this book. She started off in charge and then realized part of the way into the book she was truly meant to be a detective and go after the criminal element. I didn’t feel like I learned a ton about her in this book but I was intrigued,

The mystery was simple enough. Crazy dude is killing women he met via World of Warcraft through the chats and later through Skype. He liked to make his victims his puppets and play with them until the ultimate kill.

Jo is chasing this monster. We see the story through both Jo’s perspective and the killer’s POV.

When I got to the end of the book I felt gipped. That was it? Where was the resolution for Jo’s chase and search. Suddenly it is all over and the perp is dead. Uh, what? I totally thought this book should have been longer to delve into the gaping cliffhanger than was left at the end.

The book was decent but over too quickly and I didn’t particularly care for the ending. I felt bad for Jo… oh, okay, the hunt is over. Time to go home. No closure there. No closure for me either.

I received this as an ARC (Advanced Reader Copy) in return for an honest review. I thank NetGalley, the publisher and the author for allowing me to read this title.
Posted by Toni at 6:51 AM