The Shadow Writer by Eliza Maxwell 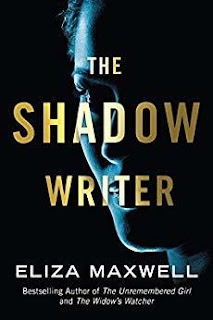 The Shadow Writer
by Eliza Maxwell

Goodreads synopsis:
Every writer has a story. Some are deadlier than others.
Aspiring author Graye Templeton will do anything to escape the horrific childhood crime that haunts her. After a life lived in shadows, she’s accepted a new job as protégé to Laura West, influential book blogger and wife of an acclaimed novelist. Laura’s connections could make Graye’s publishing dreams a reality. But there’s more to Laura than meets the eye.
Behind the veneer of a charmed life, Laura’s marriage is collapsing. Her once-lauded husband is descending into alcoholism and ruin and bringing Laura nearer to the edge.
As the two women form a bond that seems meant to be, long-buried secrets claw their way into the present, and the line between friendship and obsession begins to blur, forcing each to decide where her loyalties lie. Running from the past is a dangerous game, and the loser could end up dead.

This book was really messed up. This story messes with your head until you don’t know which way is up.

It is told from many different points of view changing from chapter to chapter. In a way the author didn’t play fair because as we see through Graye’s perspective most of the time, it is her truth of reality we see. By the end, we realize that her truth of reality and actual reality isn’t really the same thing all the time.

This was a really convoluted story about a girl from an abusive background trying to move past it in the only way she knew how… through the written word. Her early fascination with David West’s groundbreaking novel made her sure that was her path as well… stardom…. being an author who was well renowned.

The pieces of this puzzle takes a long time to figure out as we wind through the book. Everything isn’t as it seems or as the person speaking in the chapter sets forth says it is. I felt a little deceived in that way when all was revealed at the end. And my original wondering about how young a killer can be in the beginning did indeed feel like I had foretold what would soon happen.

Great book. But be prepared to be deceived.

I received this as an ARC (Advanced Reader Copy) in return for an honest review. I thank NetGalley, the publisher and the author for allowing me to read this title.
Posted by Toni at 8:43 AM