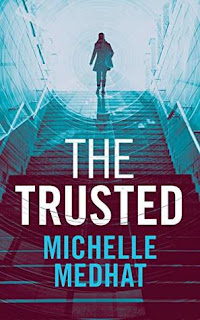 Goodreads synopsis:
Ellie Noor has created a thriving and successful life. She established a challenging and rewarding business. She lives in a stunning London apartment. And she shares it all with her gorgeous husband, Sam.

Their marriage is built on a strong foundation of trust and affection. But when a bizarre metaphysical experience shakes their peaceful home, Sam’s impulsive actions change Ellie’s view of him forever. The surreal event triggers a spiral of consequences. Ellie must adapt to survive the jolt to their domestic bliss.

But can she adjust to the shock of one simple realisation?
Her husband is not the man she thought he was.

When a relationship is built on truth, what happens when a decade-old lie is uncovered?

Sam Noor has learned to compartmentalise his complex life. Balancing an idyllic home and a lethal career, his routine is split between loving husband and trained killer. But with accumulating pressure, his carefully separated worlds fiercely collide. His oldest friend is in danger, his colleagues are untrustworthy and his wife feels betrayed.

Sam is the strongest in his field. But everyone has a limit.
How much can he stand before he breaks?

Sabena Sanantoni and Salim Al Douri are the world’s hottest celebrities. But their beautiful faces and charismatic personalities disguise a dark reality. They are the leaders of an international terrorist collective: Al Nadir. In a modern era of superstar terrorism, world leaders are at a loss. The rule book is meaningless. Experience is useless. Salim and Sabena have corrupted every corner of the globe.

With Al Nadir always one step ahead, it will take a miracle leap to level the playing field.

Treeborne has mastered the art of manipulation, permitting a prosperous political career. But are his choices really his own? Treeborne’s manipulative skills are matched by one other. Aswa-da is a sly observer from the realm of Kudamun. Indifferent to human political power play, his goal is far greater than earthly downfall. His dark plans will alter the very fabric of the Universe.

As overlapping gameplays cosmically connect, everyone is thrown into an abyss of chaos.

Who will survive in a world where no one can be trusted?

There is a lot going on in this book. Lots of characters. It is convoluted and you will definitely need a score card to keep up. While reading, I thought it was a political thriller then got to Chapter 17 and … there were aliens! I was shocked to say the least. It just felt out of place in this book. But it does work, although weirdly so.

It was hard to know who was the star in this story. There were so many points of view that I thought it was over kill. I think just staying in Sam’s POV would have been enough.

Something happened to Ellie, Sam’s wife, near the start that I never quite grasped even at the end. Plus, there were people kidnapped and tortured at the beginning but didn’t know who Al Nadir was trying to manipulate by this action. Happily it finally came around in the end the answer to my question but long after I ceased to care about the tortured family.

If you are looking for a resolution of any sort at this end of this book prepare to be disappointed. This is just a gigantic cliffhanger waiting to happen. It is the first book in an ongoing saga. Not happy about that. I like some payoff after reading nearly 300 pages.

Not sure I am invested enough to continue into book 2. But we’ll see.
(This looks like it might be a re-release of Medhat's earlier books Connected: The Call and Connected: The Shift)


I received this as an ARC (Advanced Reader Copy) in return for an honest review. I thank NetGalley, the publisher and the author for allowing me to read this title.
Posted by Toni at 7:52 AM