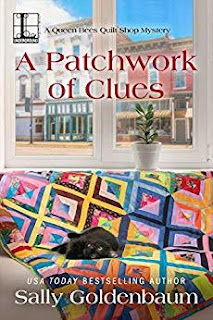 Goodreads synopsis:
Small-town quilters look for a killer's pattern in this delightful new series by the national bestselling author of the Seaside Knitters mysteries . . .

On her morning jog, Portia Paltrow comes upon the dead body of antiques store owner and college professor Owen Hill, sprawled across the back doorstep of Selma Parker's fabric and quilt shop on Elderberry Road. The site of their Saturday morning quilting bee just became a crime scene. Violent crime is rare in the charming village of Crestwood, Kansas, and rumors are soon circulating of a burglary gone wrong. But who would rob a quilt shop? No, Owen Hill has been murdered.

Selma and her assistant manager Susan are understandably at loose ends over the crime. So while the tightly knit covey of quilters—who range from a new mother to a wise octogenarian—work together on a Crystal Pattern quilt for Selma's store's anniversary, they also get busy stitching together a patchwork of clues. But they'd better work fast—before a crafty killer bolts

This is the first book in the Queen Bees Quilt Shop series by Lyrical Underground. It had previously been published as “The Murders on Elderberry Road.” This is an updated and renamed version.

I have to admit that I am the biggest crafty fanatic around, although quilting is not my particular jam. My great aunt is a quilting guru. So, I am not unfamiliar with this world.

There is a lot going on here. LOTS of characters. I had a hard time distinguishing ages between residents since there seemed to be a big gap in the age range. I wasn’t certain who the main character was through most of this. There is lot more small town gossip going on than actual mystery solving here. It was a struggle to wade through it all.

Po was getting a lot of second hand information and being as she is the main character, I think a majority of her clues should come from her own investigation not heresy. Maybe that’s just me and what I like to see in a cozy mystery.

I wasn’t engaged. I didn’t care about solving the mystery of who killed Owen and ran down the lawyer. I hadn’t met them. Didn’t know them. Why would I care? Po barely seemed to care either. I felt a lot of standoffishness between the characters in general as if they all were there not to connect with each other but to do their due diligence and get their check mark for doing a good deed.

The actual “hey we need to solve this mystery” atmosphere didn’t even come into the picture until 66 percent into the novel. Everything before this was just busy work and I wondered if I had learned anything in the previous 65 percent that amounted to more than a hill of beans. I am reading this for the mystery. I got a glance here and there but nothing definite until 66 percent in. So, if you are a person who likes to DNF a book in its early stages, you might want to wait and stick this one out.

Once the story rounded the 80 percent mark, it was off and running. Don ’t give up on this book. The end is worth the trudge through the beginning. What unfolds is a great unveiling of what will happen in future books in the series. I found myself opening to the players at the end and found it a really heartwarming conclusion that tugs at your heartstrings.

I received this as an ARC (Advanced Reader Copy) in return for an honest review. I thank NetGalley, the publisher and the author for allowing me to read this title.
Posted by Toni at 11:14 AM