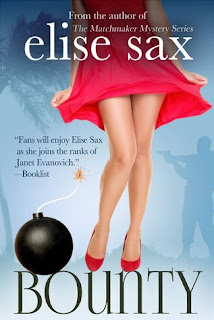 Goodreads synopsis:
Abby Williams has got it made: First a new job as magazine editor in London, and now a trip to an exotic island to review a five-star resort with poolside service. Unfortunately, on day two of her vacation, Abby finds herself bound and stuffed into a burlap bag and dragged across two continents. And worse than that? Her hottie abductor has got her distracted. Maybe escape is overrated.

Iain Brodie is a muscle-bound mercenary. He just helped a despotic dictator take over an island. He's also Abby's kidnapper, and he has his own problems. Framed for a murder he didn't commit and a boss who’s out to get him, he has to face facts: Early retirement is out of the question and Abby Williams looks damned good in a burlap bag.

This book isn’t what I was expecting based on the cover. But I was pleasantly surprised by how great it was. I would label this romantic suspense although I couldn’t categorize Iain as book boyfriend material. Too much of a loose cannon.

Basic premise: Abby takes a new job as a feature reporter in London leaving her normal cop journalism beat and finds herself in hot water… and not the hot water of the new hotel she is supposed to write a feature on. This is literal hot water. She is a bit of a ditz and walks blindly into things without thinking. So I am not surprised this entire situation fell into her life.

Iain Brody is not a good man. He was a British SIS agent turned mercenary. He assists in kidnapping Abby. It’s not his idea but he is the follow through guy. They say Abby is going to be the new wife of a dictator and Iain is going to deliver her to him. This is making Iain’s boss a crap ton of money. Then when Iain doesn’t follow the rules exactly he is framed for a murder. I wanted to like him as a leading man but I couldn’t. He didn’t deserve it. I did want him to ultimately get his SIS job back because everyone deserves to have a fragment of life they can love. I wanted him to change. Be a better man. Something. He does come to Abby’s rescue again and again but that didn’t seem to bring any more light to his character for me. Once bad, always bad, I guess.

I purchased this book with my own money.
Posted by Toni at 9:27 AM