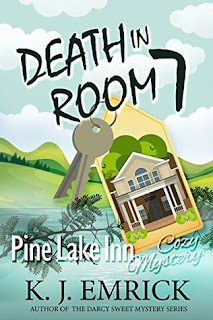 Goodreads synopsis:
From the Author of the Darcy Sweet Mystery Series...

Adelle Powers, or Dell as she is known around the town of Lakeshore, is living her dream life. She and her best friend Rosie Ryan are owners of the wonderfully quirky Pine Lake Inn, a very popular Australian tourist destination. Running her own inn is the only thing she has ever wanted to do and it is her pride and joy.

So when Dell's friend Jessica calls to say she's coming for a visit Dell is ecstatic and can't wait to show it off to her friend. Surprisingly Dell finds that Rosie is less than thrilled about the visit and can't understand why. They were all such good friends, or so she thought.

It would seem that Rosie may know something about Jessica's past that Dell doesn't. Some sort of secret that Rosie is reluctant to share with her. When Jessica is found dead in her room the following day it would appear that her secret past may have finally caught up with her.

Horrified by the death of her good friend in her very own inn, Dell soon gets drawn into the mystery. And things take a turn for the very weird when Jessica's ghost visits her, more than once, directing Dell to clues that have been overlooked by a very incompetent police investigation.

Soon Dell finds her own life in peril as she gets further into the mystery surrounding her friends life, and death.

This book was just okay for me. I picked it up from my Kindle Library since it had a key on the cover. The writing wasn’t the best but the storyline was intriguing.

The story is set in Australia. A lady owns an inn and her long-time friend is coming to visit and just after she arrives she is murdered. The Inn owner’s son is second in command to a pretty ignorant Senior Sergeant who wants all the glory but none of the hard work.

I spent most of my time reading hoping the Senior Sergeant would have been involved in the murder. I liked how the plot drew from the victim’s background and that is what came to find her that day at the Pine Lake Inn. This story could have been so much better. I wish the writing had been nicer, more fluid, descriptive. I wish the winning police man would have been someone other than her son.

I liked part of it. And another part I gravely disliked. I will try another book in my library and see if it resonates with me more. But right now, this is just middle of the road for me.
____

I purchased this book with my own money.
Posted by Toni at 7:05 AM