Don't Ever Tell by Lucy Dawson 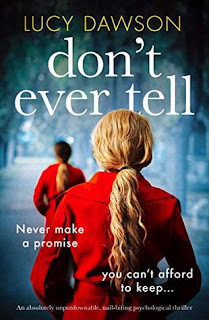 Don't Ever Tell
by Lucy Dawson

This is a story about Charlotte – a mother and a wife with the perfect job, the perfect life… at least, that’s how it looks from the outside.

But behind closed doors, the marriage is breaking, and Charlotte’s husband Tris doesn’t even know how much. He has no idea what Charlotte has planned for him, who she has found, why she has hired someone to pretend to be her. But he doesn’t have long to wait to find out…

I have to admit that I almost put this book down about halfway through. The build up just seemed to take too long and I wondered when it would get to the point.

Nothing really of consequence happened until Charlotte’s psychologist sister, Flo heard a few sessions from a new client named Mia Justice. Charlotte had met Mia a year or so earlier and marveled at how she almost seemed like a twenty year younger version of herself. She had the same mannerisms as she did also. Looks and mannerisms. It was uncanny. Then Flo told her a secret she shouldn’t have revealed. Charlotte’s husband, Tris and Mia were having an affair. To Mia his name was Seth. She had no idea he was married.

That is when Charlotte concocted a pretty sly plan. It was brilliant, actually. And this plot she came up with is what this book is about. You don’t discover what that is until after the halfway point. So don’t give up on this book too early. My rating is based on the latter half. It was a stunning picture of what could happen to a couple when things start to dry out in their relationship and cause their eyes to wander to more appealing options. Charlotte wanted the money fame could bring but not the fame itself. Mia wanted the fame and Tris wanted them both.

Great concept for a book. I thought that was the best part. When I realized what Charlotte had done and what Flo had revealed to her, I was shocked. The fallout of this is sad and scary. I didn’t see that coming.

I never quite understood the connection between Mia and Charlotte. I think it is assumed in the end that we will figure it out due to Mia’s last scene with her sister but I don’t know.

This would make a great movie or tv drama. Check it out and see for yourself. It’s a roller coaster ride!

I received this as an ARC (Advanced Reader Copy) in return for an honest review. I thank NetGalley, the publisher and the author for allowing me to read this title.
Posted by Toni at 8:21 AM