Murder by the Minster by Helen Cox, Edith Beaton 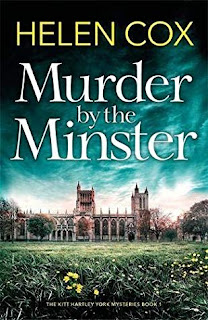 It's a perfectly normal day for Kitt Hartley at her job at the University of the Vale of York library, until detective Inspector Halloran arrives at her desk to tell her that her best friend, Evie Bowes, is under suspicion of murder. Evie's ex-boyfriend Owen has been found dead - with a fountain pen stabbed through his heart - and all the evidence points to her. Kitt knows there is no way Evie could murder anyone - let alone Owen, who she adored.

Horrified that the police could have got is so wrong, Kitt decides there's only one thing to do: she's going to investigate Owen's murder herself. She's read hundreds of mystery novels - how hard can it be?

With the help of her assistant Grace, and the occasional hindrance of the library's eccentric regulars. Kitt summons up all her investigative powers (absorbed over years of reading everything from Agatha christie to Ian Rankin) and gets to work.

She soon discovers that down the quaint streets and snickelways of York lie darker doings than she'd ever dreamed, but she needs to watch her step: the murderer is watching her. And they haven't finished killing yet. . .

All I can say is THANK GOD this is going to be a series because I don’t think I could live long without a new Kitt and DI Halloran book coming in the future. Helen Cox is a favorite new author for me. I will definitely be keeping an eye out for any new books by her.

This is basically a police procedural with cozy mystery leanings. Kitt is a librarian who is taken in for questioning for the murder of her best friend Evie’s ex-boyfriend, Owen. The mystery was pretty good and I had no idea whodunit until the end because nearly every other chapter a new suspect was introduced. The chase was thrilling, convoluted and exciting from the moment DI Halloran and his partner laid eyes on Kitt.

But my beyond favorite part of the book was the budding relationship between Kitt and DI Halloran. It was a slow build up relationship. But her friends could see Kitt peaked Halloran’s interest from the beginning even though it was his job to get to the bottom of a murder she might be involved in.

All the small moments between them is what made this so good. They are both pretty hard headed and have their own ideas about justice. Halloran follows the rules and Kitt seems to be somewhat of a rule breaker as she goes off on her own investigation even when Halloran thinks she would be safer staying out of it. That scene with the two of them by the bridge was one of the steamiest and most raw scenes I have witnessed in a long time.

I can’t wait until book two in the series comes out. I am definitely hooked.