Of Poseidon (The Syrena Legacy #1) by Anna Banks 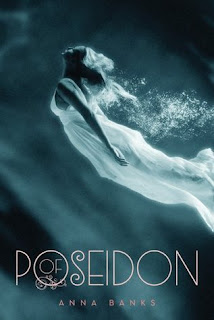 Of Poseidon
(The Syrena Legacy #1)
by Anna Banks

Goodreads synopsis:
Galen, a Syrena prince, searches land for a girl he's heard can communicate with fish. It’s while Emma is on vacation at the beach that she meets Galen. Although their connection is immediate and powerful, Galen's not fully convinced that Emma's the one he's been  looking for. That is, until a deadly encounter with a shark proves  that Emma and her Gift may be the only thing that can save his kingdom. He needs her help--no matter what the risk.

I have been meaning to pick this book up for years.  It has been in my Kindle Library since 2014. I am intrigued by Gods and God myths. This really lived up to the hype of a few years back when I remember Booktubers galore just gushing over it.

Background: Syrena = Mermaid. But don’t call them mermaids. They aren’t particularly fond of the title. Galen, a Syrena prince feels the tingles of a fellow Syrena around but she is unknown to him. He and his sister are surprised by this since there aren’t a whole heck of a lot of them around anymore. But she has the violet eyes and the sensations of being one of them. This story is told through Emma’s point of view but it is more of a story about Galen and his search to discover exactly who Emma is.

This book was very written very well. I enjoyed reading about the strange standoffish way Galen was compared to normal humans. Even though he was the ambassador between humans and Syrena he felt more like a cold fish. I can’t really get too much into the plot otherwise it will spoil it for the next person but if you like books about mermaid, this will definitely be for you. The ending is left on a cliffhanger. So, you will definitely want to pick up the next few books in the series: Of Triton and Of Neptune

I purchased this book with my own money.
Posted by Toni at 7:19 AM