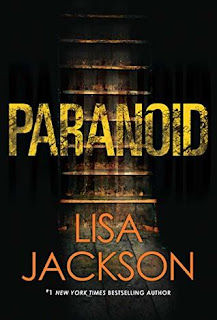 Goodreads synopsis:
From #1 New York Times bestselling author Lisa Jackson comes a new novel of nerve-jangling suspense as a woman haunted by guilt realizes that nothing can be trusted—not even her own memory …

There are people in Edgewater, Oregon, who think that twenty years ago, Rachel Gaston got away with murder.

Rachel still has no idea how a foolish teenaged game turned deadly—or who replaced her soft pellet air gun with a real weapon. When a figure leapt out at her from the darkness, she fired without thinking. Too late, she recognized her half-brother, Luke, and saw blood blooming around his chest.

Despite counseling, Rachel’s horrifying dreams about that night continue. Her anxiety contributed to her divorce from Detective Cade Ryder, though he blames himself too. But as Rachel’s high school reunion nears, she feels her imagination playing tricks, convincing her that objects in her house have moved. That there’s a hint of unfamiliar cologne in the air. That someone is tailing her car. Watching her home.

She’s right to be scared. And as connections surface between a new string of murders and Luke’s death, Rachel realizes there’s no escaping the past, and the truth may be darker than her worst fears …

This book was called Paranoid but I think a better title would have been: THEY SHOULD ALL HAVE BEEN MORE PARANOID.

The entire concept of this book was amazing. Rachel Gaston believed her whole life that she killed her half brother, Luke at the old fish cannery. It was supposed to be a game. A stupid game. The guns weren’t supposed to be real but someone still ended up dead.

I don’t want to get too much into this complex plot because the search through all the clues and motives is what makes this book so thrilling. Just when you think you know whodunit, you realize there is more to the story. That revelation came two different times for me. Jackson really took me on such a roller-coaster ride. I couldn’t put this book down. I was completely invested in figuring out what had happened not only now but back in the past too.

Geez, woman. You sure know how to write a thriller. Lisa Jackson’s sister (Nancy Bush, Bad Things) is also writing a book that comes out June 25 and they both decided to write scenes where a character is talking to a psychologist. The last reveal is who the patient really is. Wow, mind blowing. I mean, really mind-blowing.

I received this as an ARC (Advanced Reader Copy) in return for an honest review. I thank NetGalley, the publisher and the author for allowing me to read this title.
Posted by Toni at 8:16 AM