Still Not Yours by Nicole Snow "Enguard Protectors" 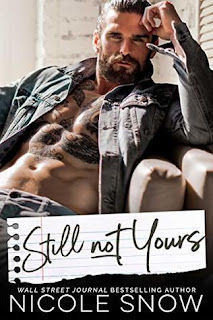 I'm on my last nerve.
And I'm supposed to marry him to save my skin.
Riker Woods might be God's hottest contradiction.
Perfectly damaged. Stubborn soul. Moth to flame gaze.
Single dad. Fierce protector. Kind...when he thinks no one's looking.

Then along came little old me.
The pesky fiancée he never wanted.
A hot mess in his neat, broody, oh-so-serious world.
Thanks, witness protection geniuses.

If only the men who want me dead were my biggest problem.
Nope, it's falling for Jekyll and Hyde.
We're too close. Too tense. Too inevitable.
We're finding new reasons to fake kiss before you can say uh-oh.
He's whispering reckless things that sound so right.
I'm helplessly addicted to playing house.

We're crossing lines like electric fences when it hits me.
Maybe pretending to be Riker's girl isn't the worst.
It's what happens next.
What if I dare to say that magic, fatal word - yours?
What if I want us to be real?

I thought this was excellent. Part thriller, part romantic suspense, all heart.

Olivia “Liv” Holly had been a captive all her life. Pushed into a corner and forgotten. She was the one who brought the stability to her family. Her over-bearing, money hungry father and her super star sister both had so many issues that Liv tried to not be in the way. She always felt like the burden when in truth it was never her issue. In the process, she ceased to live her own life and instead helped bring a calm reassurance to theirs.

The story begins with a man being gunned down right in front of Liv. Right in front of her own doorstep. Turns out the threat is coming from a gang called The Pilgrims. She isn’t sure why they are targeting her family but she figures it has something to do with her sister’s drug problem.

Enter Riker. He works for Enguard Security. He is the only one who can tackle this job. But he isn’t happy about it. The boss wants him to bring this woman into his home, endanger his daughter and pray the huge amount of money they are throwing at him will be worth it in the end.

They say this is an enemies to lovers novel. But I can’t quite buy that. I could buy strangers to lovers. Not enemies. Liv is quite mentally older than her years due to all the coping she has done with her sister and father. The only other thing about this novel I have a bit of trouble with is that Liv is around twenty-one-ish. When I was guesstimating Riker’s age due to his daughter being  12 years old, I figured he was about thirty-two. Turns out later in the book it is revealed he was in his mid-forties. That would make him roughly twice her age. That is not something I could buy easily. Even with that bit of oddness, I think the book was quite good. Somewhat sexy with more romance than actual sex. They each live in their heads a lot in this book. They both have issues to work out before the actual climax of the book and it makes it all feel so real.

We are introduced to James in a couple of ops and it turns out book four in the series, STILL NOT LOVE, features him. I always like when they kind of give you a heads up about characters ahead of time. I was intrigued by him. He seemed, part spook, part ghost and part vampire all rolled into one. Of course, I was so intrigued I had to pick it up immediately after I finished this book.

This seems like a must read series for me. I feel a sense of anticipation I can’t describe with this. It is right in my sweet spot. If you like your romance with touches of thriller and suspense, this is for you!

I purchased this book with my own money.
Posted by Toni at 8:56 AM