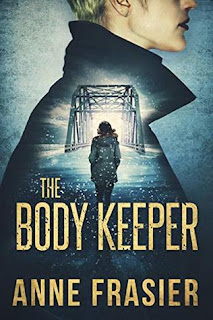 Amazon synopsis:
The Thriller Award–winning series continues as Detective Jude Fontaine finds a decades-old connection to missing children that will freeze her blood.
A boy’s frozen body is found trapped in the ice of a Minneapolis lake. The horrifying discovery leads Detective Jude Fontaine and her partner, Uriah Ashby, to more bodies in the ice, all of twelve-year-old boys missing for twenty years.
Then, in one of the worst blizzards the city has ever seen, a four-year-old is abandoned on Jude’s doorstep. The child can’t tell them where he’s from, who his parents are, or how he got there. He doesn’t even know his name.
But in his unspoken language, Jude reads something horrifying—a connection to the dead boys. Now a four-year-old with no name may be the only key to a twenty-year-old, very cold case.

This is book three in the Detective Jude Fontaine Mysteries series. Book two ended with a cliffhanger… the revelation that Elliot is Jude’s half brother from their sicko ex-Governor father who died in book 1. Other of Daddy’s little offspring do come up in this book as well.

This book focuses on a body of a blond blue eyed boy found frozen under the ice by none other than Elliot. They are in the middle of a crazy cold winter and the body is frozen through. The kid ends up being a missing child from twenty years earlier and has barely shown any signs of decomposition. When a second body is found in the ice a day later of a similarly colored boy of the same age, they know they have a big investigation on their hands.

The mystery of the dead boys pales in comparison to the secret Uriah is keeping from Jude. The characterization of everyone is just stellar in this entire series. Life is messy and the relationship between Jude and Uriah shows this off perfectly.

In the midst of the investigation, Jude finds a young boy about four years old near the door of her apartment building nearly frozen in the snow. This young kid really helps Jude open up her own hidden emotions and what she finds is just an explosion waiting to happen.

This book is excellent. An awesome study of how police work can effect your life and how you deal with what you see everyday.  Everyone deals with such things in their own way and this book shows this with style.

Highly recommended. The entire series is just beyond words amazing.

I received this as an ARC (Advanced Reader Copy) in return for an honest review. I thank NetGalley, the publisher and the author for allowing me to read this title.
Posted by Toni at 8:48 AM