The Seduction by Carly Phillips - Kindle Worlds - The Arrangement spin-off 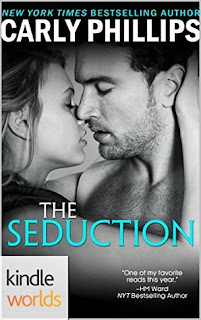 The Seduction
(The Arrangement Universe) Kindle Worlds
by Carly Phillips

Goodreads synopsis:
Revenge is a dish best not served …

Zach Anders swears to get revenge on Sean Ferro for hurting his sister. The best way to accomplish his goal? Hurt someone close to him in return.

No one can get near Ferro’s on again - off again fiancée - so Zach sets his sights on the next best thing, the woman Sean considers family, the girl who grew up next door, Chloe Reynolds. The plan seems simple -- get close, find her weak spot, exploit it and walk away.

Then Zach meets Chloe and he falls hard. And fast. How can he use her for revenge when he wants to keep her for himself?

I am not sure if everyone has experienced Kindle Worlds before. I have read a few in my day. But basically this is a sort of fan fiction with new characters in a current book universe. This book is connected to the series, The Arrangement by H.M. Ward. A spin-off per say.

Zach is out for revenge against Sean Ferro for hurting his sister. Sean is the main guy in The Arrangement. But instead of going after current Sean’s girlfriend who Zach can’t seem to touch, he goes after a girl who is important to him. A girl like a sister to him.

I found this book quite interesting. Zach wanted revenge but he was conflicted. The girl he chose to manipulate, he ends up falling for her. Now he doesn’t know if he wants his revenge or he wants to find a place in his life for her. Of course, he has gone too far to turn back and that alone causes all sorts of conflict once the dirty laundry is aired and the crap hits the fan.

Great suspense and tension. And of course, the sexy parts were good too. I actually read this book before I read the one that inspired it. Good stuff.

I purchased this book with my own money.
Posted by Toni at 8:38 AM