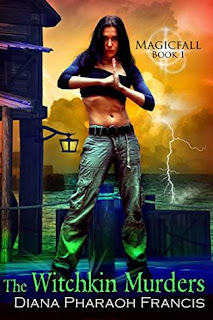 Goodreads synopsis:
Four years ago, my world—the world—exploded with wild magic. The cherry on top of that crap cake? The supernatural world declared war on humans, and my life went straight to hell.
I used to be a detective, and a damned good one. Then Magicfall happened, and I changed along with the world. I’m witchkin now—something more than human or not quite human, depending on your perspective. To survive, I’ve become a scavenger, searching abandoned houses and stores for the everyday luxuries in short supply—tampons and peanut butter. Oh, how the mighty have fallen, but anything’s better than risking my secret.

Except, old habits die hard. When I discover a murder scene screaming with signs of black magic ritual, I know my days of hiding are over. Any chance I had of escaping my past with my secret intact is gone. Solving the witchkin murders is going to be the hardest case of my life, and not just because every second will torture me with reminders of how much I miss my old life and my partner, who hates my guts for abandoning the department.

But it’s time to suck it up, because if I screw this up, Portland will be wiped out, and I’m not going to let that happen. Hold on to your butts, Portland. Justice is coming, and I don’t take prisoners.

This is the first book in the Magicfall series. The author is a new one for me and I was not disappointed. Awesome stuff lives in these pages. I realized later that I had another of the author’s books in my Kindle Library (THE CIPHER). So, I may be reaching for that one soon hoping it is as stellar as this one.

This book has a pretty interesting magic system. I used to wonder what people meant when they said that, and this book really schooled me on magic systems and what they truly mean. Basic premise: one day life was normal. The next day some Gods decided that keeping the magical folks of the Earth suppressed was not good. Thus began the war between the Witchkin and the Humans. Witchkin is another name for magical folk. During Magicfall a lot of normal humans changed into other things, witches, mages, technomages, shifters, etc. The whole merging of technology and magic was a very cool concept.

The story is pretty much about two detectives. One became a witch but hid his powers. One became a shifter, or a monster as she came to refer to herself. This is the story of what happens after they meet again four years later after Magicfall. They had been the closest of friends, partners on the force. When Kayla finds three Witchkin murdered and calls Ray to investigate he knows there could be a problem. The human world doesn’t think Witchkin are worthy to protect and serve. The police only protect humans. The Witchkin are little better than vermin. Ray does investigate even though he can’t do it officially. He does it for Kayla.

This book was fascinating. I was enthralled by Kayla and how she dealt with what Magicfall had done to her. She was barely coping. Ray was the same way. He had magic he didn’t know how to control. And being a detective and a witch was not actually playing by the police rules. They each struggled with who they were without the other. They were both hurt and suffering. Being away from each other had cost them immensely in many ways. The Witchkin Murders drew them together.

The book is kind of epic. It has great scope. And I wasn’t sure The title Witchkin Murders did it justice. The title is true but doesn’t quite seem to fit. I would have loved to see a morphed version of Kayla on the cover transforming from the Blue and Gold Water Dragon to her normal human form and Ray with his detective’s badge, magic flowing around it. I don’t have an idea for a new title. But I think Magicfall might have been a better choice.

I am completely invested in this world. I love all the characters, maybe not Dix, but everyone else. Like I said, it was fascinating. I don’t read a lot of fantasy but when they paired it with detectives all the little bells in my head were screaming Yes, Yes, Yes!

This isn’t going to be everyone’s speed. But if you like to read great characterization, conflict and resolution then you need to read this. My highest recommendation.

I received this as an ARC (Advanced Reader Copy) in return for an honest review. I thank NetGalley, the publisher and the author for allowing me to read this title.
Posted by Toni at 11:42 AM