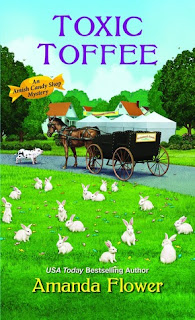 Bailey King’s in New York wrapping up a six-week shoot on her first cable TV show, Bailey’s Amish Sweets, when she gets a call from her Ohio town’s resident busybody. With Easter around the corner, Bailey’s been recruited to create a giant toffee bunny for the weeklong springtime festival that will also feature live white rabbits. But back home in Harvest, death becomes the main attraction when Stephen Raber keels over from an apparent heart attack—with Bailey and Raber’s pet bunny as witnesses.
.
Except it wasn’t Raber’s heart that suddenly gave out—a lethal dose of lily of the valley was mixed into a tasty piece of toffee. Who’d want to poison a jovial rabbit farmer who reminded Bailey of an Amish Santa Claus? To solve the murder, she and her sheriff deputy boyfriend Aiden must uncover a twenty-year-old secret. She’ll need to pull a rabbit out of a hat to keep a healthy distance from toxic people, including one venomous killer . . .

This is the first book in the Amish Candy Shop Mysteries by Amanda Flower.

This book was just okay for me. I think the whole Amish scene was a bit too tame for my action adventure covert ops missions taste. I am not saying the mystery wasn’t good or compelling. This was just a more wholesome cozy mystery than many I have read lately. The setting and Amish life characters almost force this to be a bit more of a backwards read.

There is more visiting and chocolate candy making than actual mystery solving. I am more about the mystery. I guess I am just a whodunit girl. I blame Nancy Drew. It’s all her fault.

When the deputy shot the head off of Bailey’s toffee rabbit, I think that was the most exciting thing that happened besides the actual murder. Most of the story is about a land dispute between three farms, The man with the middle farm has the phone shed on the outskirts of his property. This is where the murder occurred. The two properties beyond him have youngsters they plan to have marry and thus making these two farms one. Having a property between them might prove to be a bit difficult.

The plot was a roller-coaster ride and you will have to pay attention to the clues. There is quite a plot twist before all is discovered. I didn’t know whodunit until nearly the end.

Definitely pick this up if you are a cozy mystery lover.

I received this as an ARC (Advanced Reader Copy) in return for an honest review. I thank NetGalley, the publisher and the author for allowing me to read this title.
Posted by Toni at 8:00 AM