Whisper in the Night by D.K. Hood 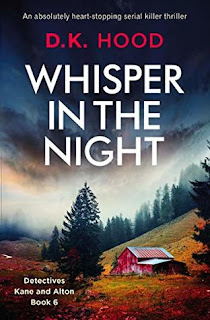 Whisper in the Night
(Detectives Kane and Alton #6)
by D.K. Hood

Goodreads synopsis:
She opens her eyes and struggles to make out the dark room around her. One thing she knows instantly – her wrists are bound and she’s tied to a chair, unable to move. As she screams for help, she hears footsteps outside. He’s coming…

Fifteen-year-old Lindy Rosen has been having nightmares for weeks, waking in a panic, screaming that there’s a man in her room watching her sleep. Her parents assumed it was her overactive imagination, but when one morning they find Lindy missing from her bedroom, they’re not so sure. Detective Jenna Alton is called in to investigate.

Within hours of the schoolgirl going missing, the kidnapper reaches out to Jenna with a video of Lindy bound and tied to a chair, crying to be set free. And a simple message – you’ve got 24 hours to find her or I kill her.

Jenna’s team work around the clock to try to find Lindy before the deadline, but time runs out, and Jenna receives a devastating message. The killer has made good on his promise. He’s playing a dangerous game. And no one knows what his next move will be.

But just two days later, one of Lindy’s school friends is taken in the middle of the night and the countdown begins again.

This is the sixth book in the Detectives Kane and Alton series. I felt like the characters in this were developed to a higher level. The author is comfortable with them and their world. But I felt Jenna Alton as the sheriff was not believable. Why is she the “sheriff” in this and Kane the “deputy”? Kane seemed much more competent. Even Wolfe was outstanding and could have deserved the title. Jenna felt weak. And in her position, weak is not good.

I have not read any of the other books in this series but I am intrigued and I want to know more about these two detectives. Were they always so close? How did Jenna attain this position over Kane?

This story is basically about girls being kidnapped and then tormenting Jenna and forcing her to find them before he kills them. But truth be told, this killer doesn’t play fair. He nearly blows up both Kane and Alton before the investigation can even get started. The the killings begin to change with death three from a cool indifference to a seething rage. What changed isn’t clear but Alton knows she must bring her A Game to come out on top.

Pretty good police procedural. The first two killings seemed a bit repetitive but then the third killing started to make it all more interesting for the investigation. Easy to follow leads and quite capable secondary characters. Really liked Kane and Wolfe the best.

The last 20% of the book really ramps up the tension and excitement. Action adventure at its best. This book doesn’t peter out like some do. It sustains the suspense all the way to the end.

I would definitely recommend this. Easy to get into even in book six. But starting from the beginning might make all the back story a whole lot clearer.


I received this as an ARC (Advanced Reader Copy) in return for an honest review. I thank NetGalley, the publisher and the author for allowing me to read this title.
Posted by Toni at 9:08 AM