An Unsettled Grave by Bernard Schaffer 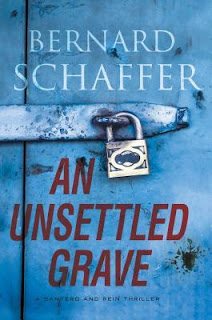 An Unsettled Grave
by Bernard Schaffer

Goodreads synopsis:
In this brilliantly chilling follow-up to The Thief of All Light, veteran police officer Bernard Schaffer digs deep into the past--and the haunted psyches of the detectives who search for truth . . . at any cost.

"There's a thousand scavengers in these woods."

Before being promoted to detective, Carrie Santero was given a rare glimpse into the mind of a killer. Through her mentor, Jacob Rein--a seasoned manhunter whose gift for plumbing the depths of madness nearly drove him over the brink--she was able to help capture one of the most depraved serial killers in the country. Now, the discovery of a small human foot buried in the Pennsylvania woods will lead her to a decades-old cold case--and the darkest secrets of her mentor's youth.

"Nobody trusts an animal that tries to eat its own kind."

Thirty years ago, a young girl went missing. A police officer was murdered. Another committed suicide. The lives of everyone involved would never be the same. For three agonizing decades, Jacob Rein has yearned for the truth. But when Detective Carrie Santero begins digging up new evidence, she discovers some answers come with shattering consequences.

Before you start reading this be aware this story from chapter to chapter will jump back and forth in time. Sometimes you will be seeing JD’s view of things as a kid or Sheriff Ollie’s view from the past. And then very quickly later be thrust back into present time with Carrie’s investigation.

This starts off with a gal being pulled over by a cop on a deserted road and raped. Carrie takes the call and wants to investigate but her boss accuses her of wanting to stir up a “shit storm” and reassigns her to a cold case from the past where new evidence has come to light. I don’t think her boss realized what the term shit storm actually meant. She went from a camp fire to a blasing inferno.

I was looking for more information about the present day JD/Jacob but found that sorely lacking from this book. I had not read book one where I figure all the info I desired lay. So you may need to read book one if you want a clearer picture of present day JD. But this book succeeds without it. Learning about young JD and his experiences is enough. JD is responsible for getting Carrie involved in the case since he knew the dead girl from when he was a kid.

I felt bad for both Hope Pugh and Sheriff Ollie. They both were on the brink of discovering a new and lasting relationship before their lives were quickly extinguished. I would have liked to see an epilogue where Sheriff Ollie and Auburn’s death were revealed to the public. And the entire situation explained in order for life to feel like it ended in some sort of order. But life is messy sometimes and I understand why it was left out.

The lives of the people in this book are screwed up. But justice is served in the end even if some people weren’t alive to see it. Check this book out. New author to me and I will definitely pick up book one in the series soon!

I received this as an ARC (Advanced Reader Copy) in return for an honest review. I thank NetGalley, the publisher and the author for allowing me to read this title.
Posted by Toni at 9:30 AM