Beyond the Chase (Hidden Truths #2) by Brittney Sahin 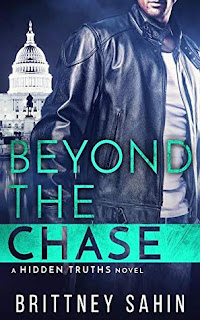 Beyond the Chase
(Hidden Truths #2)
by Brittney Sahin

Goodreads synopsis:
When your whole world disappears, where do you turn?

Everything is missing, including her boss and the formula for the dangerous chemical substance they had just discovered.

The major problem? No one was supposed to know her lab even existed. And now Ava is the main suspect in the crime.

Ava needs answers, and she’s utterly alone. Her search for her boss leads her to former Marine Aiden O’Connor, a Boston pub owner with a sexy Irish accent. But can she trust a man with more secrets than her own?

Aiden opened his pub to put the past behind him. But when Ava shows up demanding help, he realizes this brilliant woman might be the key to his own retribution. Aiden finds himself pulled back into a world of intrigue and danger, where he can't tell his enemies from his friends.

Together, the beautiful biochemist and Irish bar owner go on the run, both seeking salvation—neither expecting that the other is the secret to unlocking their heart.

This is the second book in the Hidden Truths series by Brittney Sahin.

There is just something about a sexy Irishman who doesn’t immediately fall at the feet of a girl who is the twin of a supermodel. This book had me captivated by the get go.

Ava Daniels is about as far removed as career goes from her sister the supermodel. She is a microbiologist who works for the government in a secret off the books facility where they are trying to complete an investigation into a dangerous chemical substance. When Ava gets to work one morning she discovered the entire lab has been wiped clean. There is nothing there at all. Every room is empty.

Ava tries to figure out what to do and finds a link to her boss’s family and goes to Boston to see if his nephew can help her locate her missing co-workers. Aiden O’Conner is not the type to trust easily due to his time in the military. He is immediately skeptical of Ava and blows her off. But she is not one to give up and keeps at him. Then Aiden spies a tail watching her and he is someone Aiden recognizes. He then relents and helps her.

This situation is so much bigger than any of them realize and now they are on the run for not only their lives but the lives of the American public.

I could not put this book down. From all the scenes with Aiden and the dire circumstances they found themselves in, I thought it was all great. My favorite book in the series so far. Nice to see people from book one popping up and helping in their time of need. I appreciate when an author makes sure and introduces us to the main characters of their next book so we are primed and ready to read the next fantastic offering in the series. Can’t wait to read book three!

Highly recommended.
Posted by Toni at 9:03 AM