Beyond Limits (Tracers #8) by Laura Griffin 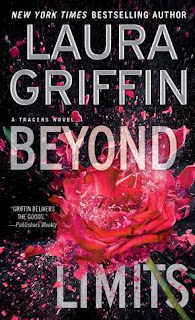 Beyond Limits
(Tracers #8)
by Laura Griffin

FBI agent Elizabeth LeBlanc is still caught in the aftermath of her last big case when she runs into the one man from her past who is sure to rock her equilibrium even more. Navy SEAL Derek Vaughn is back home from a harrowing rescue mission in which he found evidence of a secret terror cell on US soil. Elizabeth knows he’ll do anything to unravel the plot—including seducing her for information. And despite the risks involved, she’s tempted to let him. Together with the forensics experts at the Delphi Center, Derek and Elizabeth are closing in on the truth, but it may not be fast enough to avert a devastating attack…

Following in the bestselling tradition of the Tracers series, including Exposed, Scorched, and Twisted, Beyond Limits pulls out all the stops with Griffin’s most gripping thriller yet.

This is the eighth book in the Tracers romantic suspense/thriller series.

I am not sure where I got in my head that Laura Griffith was more of a horror author than thriller/suspense author. That mere thought has kept me from reading the many books I have from her in my TBR pile. Now I feel sad because I could have been enjoying all these Tracer series books much earlier! This book was not only thrilling but amazing! I need more and more now!

Elizabeth has a past with a SEAL named Derek Vaughn. Elizabeth gets put on an important task force by an important high up FBI guy named Gordon who knows of this connection between them. Derek doesn’t like red tape when dealing with capturing a bad guys. He wants swift justice. Gordon has rules to follow but he wants Vaughn to cut through the red tape for him. And he is using Elizabeth to make thus happen.

Elizabeth is very conflicted in this novel. She wants to do all this on her own but she has not gotten Derek out of her mind even after a year! She is frustrated and really needs a little closure. Derek being Derek, he inserts himself into her investigation and begins doing some investigating of his own. Of course, in one day he has made more progress on their case than the entire FBI task force has made in a month.

This book really keeps you on your toes. There is barely any downtime for the characters to think about their relationship along the way. Yet we get all the feels with their romantic interludes along with the pounding action we all know and love.

I am returning to this series for sure because I am completely hooked and enamored by Griffith’s writing style and characterization.

I received this as an ARC (Advanced Reader Copy) in return for an honest review. I thank NetGalley, the publisher and the author for allowing me to read this title.
Posted by Toni at 7:46 AM