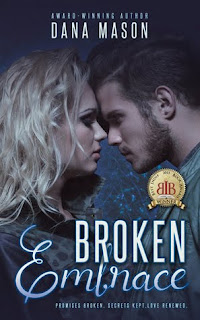 Goodreads synopsis:
The Past…
As childhood sweethearts, Brian and Melissa's plans were simple: finish school, get married, and live happily ever after. Unfortunately, life didn’t go as planned. Melissa went away to college, and Brian married her best friend.

The Present…
Seventeen years have passed and Brian's stable family life has come crashing down around him. His wife’s a cheater, his teenage daughter is hiding things from him and Melissa is back in town to remind him of what he lost all those years ago.
Melissa's returned home, ready to forgive and focus on her future, but that all changes the day she gets a desperate phone call from Brian’s daughter, Erin. Thrown back into Brian’s tumultuous life, Melissa struggles to move beyond the pain of his broken promise.

The Future…
While working together to save Erin from the evil web she’s caught in, Melissa and Brian fight to fix the past or face losing each other all over again.

This is book is the third book in the Embrace series by Dana Mason. It features Brian, the lead detective from the previous two books, and Ali’s twin sister, Melissa.

There is a lot of history between these two. Brian and Melissa were high school sweethearts. But when Melissa went off to college, Brian and her best friend Julie slept together and ended up getting pregnant. Brian did the right thing and married Julie.

Melissa had no idea about their one time hookup until after Brian and Julie were married. She was shattered emotionally from the betrayal. Seventeen years later Julie is fed up with Brian. Instead of telling him the problems she has with his constant work schedule, she goes against her better judgement and begins an affair with a teacher at her daughter, Erin’s, high school. Brian comes across the two of them while on patrol. And when he goes to question her at home that night, she walks out on him and the family. Not long later, Brian’s partner, Johnny Rhay comes to the door to tell him that his wife was in a car accident. She died later at the hospital.

Melissa and Julie had only recently mended their broken friendship and now with her gone, Melissa isn’t sure what is right? Now that Brian is available … could they possibly have a chance at love? There are a number of obstacles keeping them apart; one of which is the secret Erin is keeping from them all concerning her water polo coach who had been dating her mother.

This book contained tons of action and confrontations. If you are triggered by violence, you might want to refrain from reading this. A number of the characters get the crap beat out of them. But it is totally worth the read if you have a mind for it. The author said this was her favorite story of the trio and I have to agree that this one has the juice to make you wish for more future books. The author also said she plans to write more books in the Embrace series featuring Shane, one of Mark’s security guys and Erin and Matty from this book. So, I look forward to those. I am excited.

I am in awe of how complex the storylines are in these books. And the characterization is out of this world amazing. You will find this is a master class in character building and motivations. Check this series out and I know you will be thirsting for more.