Careful What You Wish For by Hallie Ephron 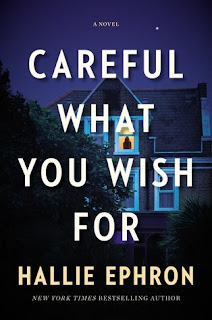 Careful What You Wish For
by Hallie Ephron

Goodreads synopsis:
From the New York Times bestselling author of There Was an Old Woman comes a novel about a professional organizer with a deadly problem she may not be able to clean up.

Emily Harlow is a professional organizer who helps people declutter their lives; she’s married to man who can’t drive past a yard sale without stopping. He’s filled their basement, attic, and garage with his finds.

Like other professionals who make a living decluttering peoples’ lives, Emily has devised a set of ironclad rules. When working with couples, she makes clear that the client is only allowed to declutter his or her own stuff. That stipulation has kept Emily’s own marriage together these past few years. She’d love nothing better than to toss out all her husband’s crap. He says he’s a collector. Emily knows better—he’s a hoarder. The larger his “collection” becomes, the deeper the distance grows between Emily and the man she married.

Luckily, Emily’s got two new clients to distract herself: an elderly widow whose husband left behind a storage unit she didn’t know existed, and a young wife whose husband won’t allow her stuff into their house. Emily’s initial meeting with the young wife takes a detour when, after too much wine, the women end up fantasizing about how much more pleasant life would be without their collecting spouses.

But the next day Emily finds herself in a mess that might be too big for her to clean up. Careful what you wish for, the old adage says . . . now Emily might lose her freedom, her marriage . . . and possibly her life.

Emily Harlow is a professional organizer with a husband who is a closet hoarder. She can declutter other people’s lives but not her own. Her rule is that you have to only declutter your own stuff. So she is stuck with a half messy/half perfect house and it doesn’t always spark joy.

She and her best friend, Becca own a decluttering business together. Two new clients come on Emily’ radar. One is an older woman who found a storage unit her dead husband had kept from her. And a recommendation from Emilly’s husband’s attorney colleague, Ryan, brings Quinn into her life as well. Quinn’s husband has a big collection of things that Emily is sure her own husband Frank would love. But Quinn’s husband won’t let her put her own stuff in the house so she is wanting Emily to help her sort through it and discard the things she no longer needs.

The two of them get to talking and while drinking a bit of prosciutto Quinn wonders out loud what it would be like if both of their husbands were no longer in the picture. Not long later Quinn’s husband’s car is found abandoned and Quinn wonders if Emily did something to him considering their earlier conversation. Dun dun dun!!

This book was mega creepy. And I marveled at how easily it was to manipulate Emily. When Emily’s mother was brought into the picture to look at all the supposed “borrowed” things in Mrs. Murphy’s storage unit, I felt like the tide had turned and having her there lent support to Emily in her time of need.

I went back and forth about who I thought had done it. The college sweater Emily recognized that was in Quinn’s possesion was the fist inkling of an idea that really panned out for me in the end. Quite a complex mystery. And I have no idea how they almost pulled it off. This was a nail-biter for sure! I almost wish there were more books in this series but it seems to be a standalone.

I received this as an ARC (Advanced Reader Copy) in return for an honest review. I thank NetGalley, the publisher and the author for allowing me to read this title.
Posted by Toni at 7:36 AM