Discretion by Karina Halle - The Dumonts #1 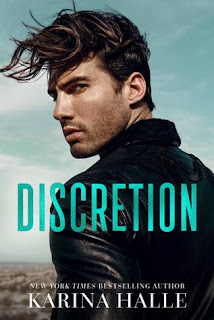 The Riviera means indulgence—if you’ve got money. For Sadie Reynolds, a down-on-her-luck student, the Riviera means dingy hostels and back streets. When a wrong turn puts her in jeopardy, the last thing she expects is to be saved by the most handsome stranger she’s ever locked eyes with. When she later wakes up in a luxury suite with a Mediterranean view, she’s in the tender care of her rescuer: Olivier Dumont, France’s most eligible bachelor, billionaire hotelier, and heir to the Dumont fashion fortune.

Olivier also owns his reputation for scandal. But Sadie is unlike any woman he’s ever met. Her humble persona and wild innocence promise real passion. He’s promising Sadie something too: anything she wants. From Bordeaux to Cannes to Paris, Sadie’s past in America is swept away and replaced with a fantasy too good to be true.

Pulled into Olivier’s orbit of wealth, glamour, and excess, Sadie discovers that the Dumont dynasty comes with a legacy of wicked secrets. And Olivier’s secrets may be the most damning of all… (less)
Paperback, 288 pages
Expected publication: August 6th 2019 by Montlake Romance

This is the first book in the Dumonts series by Karina Halle.

I have read a few other books by Halle so I knew this was going to be a story with good characterization. And I wasn't wrong. This story gives you all the feels. I felt for Sadie as she reeled from her breakup with Tom and then again as she was attacked on her way to the train station. Enter Olivier. He's France's version of Hollywood Royalty. His family is uber rich with every luxury you can think of. He is exactly the opposite of Sadie. So, when he saves her from her attacker he already knows things are going to be different in his life from this day forward.

There is a lot of family drama in this and I don't want to give away any of the juicy details but needless to say, Olivier's uncle did a number on him when he was 20. Emotional blackmail. I felt sick that family could treat each other in this way. I had to pause my reading a few times because I really wasn't sure I wanted to know what the uncle had truly done to him. But it was this plot point that kept me reading. A lot of the family stuff isn't wrapped up yet... Obviously because this will be a series of books. I hope by the last book Olivier gets back what he lost here at the end of book one.

I was totally captivated throughout it all. Great suspense and a real page-turner. When his cousin Pascal watched them make love I was completely creeped out. I wonder if a future book will feature him. He needs to be redeemed in some way. They were all manipulated by the crazy uncle. I have hope this family will make it past the mountain of obstacles in front of them.

I wanted to take a second to thank the author. She went through a deep bought of depression while writing this. And I have to say I am glad she stayed the course and pushed through to recovery. This book is a testament to having the courage to know what you want in life and keep reaching for it every day.

I want to thank NetGalley, the author and the publisher for allowing me to read this ARC in return for an honest review. I am blessed to be able to do this for them.
Posted by Toni at 10:05 AM