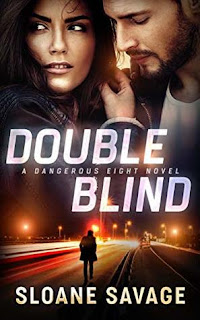 Goodreads synopsis:
When Kat’s blind date turns out to be an undercover FBI agent, her humdrum life takes a decidedly more exciting turn. First, she’s mistaken for a hooker and then she survives being shot at—twice. Now her boss has been murdered, her roommate has been kidnapped, and a contract killer wants her dead.

Once upon a time, FBI Special Agent Scott Bishop was quickly moving up the career ladder at the bureau. Then his career took a sharp detour into no-man’s land. In an effort to get back on track, he takes a temporary undercover assignment, working to expose a money laundering operation run by the elusive Cameron Greyson.

Unfortunately, nothing about this case is simple. Bishop’s field supervisor drops the ball, and an assassin beats them to the punch. Greyson is dead, Bishop’s cover is blown, and Kat, caught in the middle of a crazy situation, is in danger.

Bishop must keep Kat safe—regardless of whether she wants his help or not. In the end, will she be willing to take a chance on Mr. Dangerous? Will he be willing to sacrifice his career for the woman he loves?

This is the second book in the Dangerous Eight romantic suspense series by Sloane Savage.

Kat thought she was going on a blind date. Then she runs into her own doppelganger in the bathroom. Somehow she and her twin end up with each other’s date. That means that FBI Special Agent Scott Bishop is wooing the wrong woman. They spend the night together and while Scott thinks he is there to milk a call girl for information Kat knows no such thing. She overhears him on the phone saying he paid her the money and that is when reality dawns on her. She escapes the room and heads home crushed. When Kat goes back to the martini bar where she suspected she lost an earring, she finds the hostess dead behind her station. And everything just gets weirder from there.

Kat is over her head. At work she spies Mr. Sexy coming off the elevator and then spies him again. But there can’t be two of them, can there? Then her doppelganger comes out of her boss’s office. She has killed him. Now the only difference between her and the shooter is the gal’s now pink hair.

The action in this is crazy. Just when I think it might wrap up, they dive in for more. The characters are really good in this series and you feel like you are watching a tv show unfold before your eyes.

The entire plot line is mega complex and a bit of a mind-bender at times but you can follow it all the way to the conclusion. For a while I was beginning to wonder if there would be a way out for them both but luckily this isn’t real life. There are a lot of alphabet agencies in this which makes it more convoluted on top of the complex structure. Plus having the FBI and CIA is just cool, right?

I loved every minute of reading this but wished there had been more of the Dangerous Eight guys in scenes. Those were my favorite parts.

If romantic suspense is your thing, you will love this. Check it out.