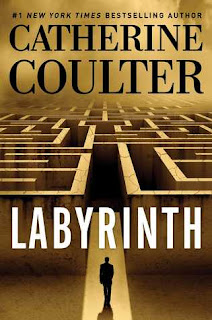 Goodreads synopsis:
The #1 New York Times bestselling FBI Thriller series returns with another tour de force in which Agent Sherlock risks losing her career—and her sanity—over a case that is more complicated and twisted than any she’s ever encountered.

On a dark night, Agent Sherlock is driving along circuitous mountain roads in West Virginia when her car is suddenly T-boned at an intersection. As her car spins out of control, a man’s body slams against her windshield and then—blackness. When she finally comes to, Sherlock has no memory of the accident, nor of the moments that led right up to it. But what she does know is that the man she hit is a local CIA analyst…and now he’s missing.

Meanwhile, in the small town of Gaffer’s Ridge, Virginia, Special Agent Griffin Hammersmith has just rescued a kidnapped woman who claims her captor admitted to the murder of three teenage girls. However, the man she accuses is related to the local sheriff and a member of a very powerful family. Special Agent Hammersmith reaches out to Sherlock for help, and they soon realize that the disappearance of the CIA analyst is actually connected to the string of murders. But how?

This is the 23rd book in the Agents Sherlock and Savich FBI thriller series.

It has been a long time since I have read a S/S FBI book. I have to say that this book re-hooked me into the series. I am so impressed this series has lasted the test of time. I remember when book one: THE COVE came out. Wow, what a journey this has been for the author!

Basic premises: Sherlock is involved in a pretty nasty car accident which wipes her memory. As her car spins and she is out of control of the wheel, the vehicle hits a man who is running from two people. He is a CIA analyst and the accident messes him up pretty good. But he runs off and escapes his captors.

In the meantime while Sherlock is in the hospital, Savich receives a call from Agent Hammersmith who had rescued a journalist Carson DeSilva from being held captive by a mad man. Strangely enough the sheriff thinks her accusation is ridiculous and refuses to bring in the mad man who is strangely enough his nephew. No charges are filed and instead the sheriff puts Hammersmith and DeSilva in jail and all the evidence of Carson’s capture have disappeared. Carson has a psychic gift as does Hammersmith and Savich. Carson overhears the sheriff’s nephew as he is thinking about the three missing girls in the area. This psychic gift comes in more prominently later in the book.

There is a lot going on in this story. Sherlock has amnesia and there is a great dynamic between her and Savich as she not only learns to trust him again but get back her memories in little flashes. Savich and Sherlock assist Hammersmith and there is a great scene where the FBI area chief come in with a bunch of agents in tow all wearing battle gear and storming the sheriff’s office in Gaffer’s Ridge. Classic!

The book is segmented in two over-arching storylines: The kidnappings from Gaffer’s Ridge with Hammersmith and DeSilva and the story featuring the CIA analyst and Sherlock’s car accident. It definitely keeps you guessing and entertained until the end.

I received this as an ARC (Advanced Reader Copy) in return for an honest review. I thank NetGalley, the publisher and the author for allowing me to read this title.
Posted by Toni at 9:03 AM