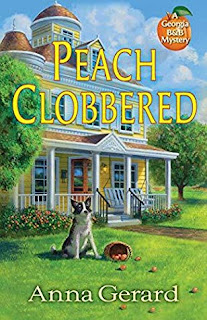 Goodreads synopsis:
What’s black and white and dead all over? Georgia bed and breakfast proprietor Nina Fleet finds out when she comes across a corpse in a penguin costume.

Nina Fleet’s life ought to be as sweet as a Georgia peach. Awarded a tidy sum in her divorce, Nina retired at 41 to a historic Queen Anne house in quaint Cymbeline, GA. But Nina’s barely settled into her new B&B-to-be when a penguin shows up on her porch. Or, at least, a man wearing a penguin suit.

Harry Westcott is making ends meet as an ice cream shop’s mascot and has a letter from his great-aunt, pledging to leave him the house. Too bad that’s not what her will says. Meanwhile, the Sisters of Perpetual Poverty have lost their lease. Real estate developer Gregory Bainbridge intends to turn the convent into a golfing community, so Cymbeline’s mayor persuades Nina to take in the elderly nuns. And then Nina finds the “penguin” again, this time lying in an alley with a kitchen knife in his chest.

A peek under the beak tells Nina it’s not Harry inside the costume, but Bainbridge. What was he doing in Harry’s penguin suit? Was the developer really the intended victim, or did the culprit mean to kill Harry? Whoever is out to stop Harry from contesting the sale of his great-aunt’s house may also be after Nina, so she teams up with him to cage the killer before someone clips her wings in Peach Clobbered, Anna Gerard’s charming first Georgia B&B mystery.

This is the first book in a new series by Anna Gerard titled Georgia B&B Mystery.

When the book opens Nina Fleet (pronounced Nine-ah) has bought a new Victorian house in Cymbeline, GA. Apparently, prior to the opening of the book there was a bit of controversy about who had the right to the house. The great nephew of the prior owner claimed the house was supposed to be his but it was sold while he was working a gig as an actor. Now two months later he comes knocking at Nina’s door bearing proof of his claim. He is surprisingly dressed in a penguin suit in the summer heat and then proceeds to faint on her doorstep from heat stroke.

And then it is one outrageous thing after another. The mayor practically forces Nina to start the bed and breakfast she had been considering opening after a bunch of Nuns are displaced due to a crooked land owner who wanted to develop the property the church was sitting on. And when the crooked land owner is soon found dead in the alley behind the antique shop Nina tries to discover who is behind it all before Harry, her original nemesis finds himself in jail for good.

When the killer is revealed at the end, I have to say I was flabbergasted. Didn’t see that one coming. I found myself chuckling at all the crazy get ups donned by Harry as he had one new gig after another. I did feel like there was a little chemistry between Harry and Nina but maybe that will be addressed in future books. I mean, why keep putting up with the man if you didn’t have some underlying motive for keeping him around.

This book was fun and I enjoyed every twist and turn. I wonder if Harry Westcot will end up being a recurring character since the whole “who owns the house” remained at the end of the book as up in the air.

If you love a good and fun cozy mystery, definitely check this one out.

I received this as an ARC (Advanced Reader Copy) in return for an honest review. I thank NetGalley, the publisher and the author for allowing me to read this title.
Posted by Toni at 9:41 AM