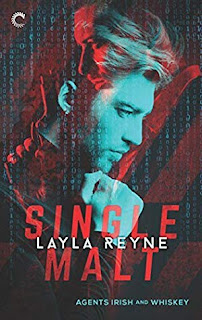 Eight months after the car crash that changed everything, FBI agent Aidan Talley is back at work. New department, new case and a new partner. Smart, athletic and handsome, Jameson Walker is twelve years his junior. Even if Aidan was ready to move on—and he's not—Jamie is off-limits.

Jamie's lusted after Aidan for three years, and the chance to work with San Francisco's top agent directly is too good to pass up. Aidan is prickly—to put it mildly—but a growing cyber threat soon proves Jamie's skills invaluable.

Jamie's talents paint a target on his back, and Aidan is determined to protect him. But with hack after hack threatening a high-security biocontainment facility, time is running out to thwart a deadly terrorist attack. They'll have to filter out distractions, on the case and in their partnership, to identify the real enemy, solve the case and save thousands of lives, including their own.

This is the first book in the Agents Irish and Whiskey series by Layla Reyne. This is a M/M romance, so be aware before picking this book up.

I am not exactly sure what I was expecting when I picked this up but I was happily surprised by this new gem series. I am excited to dive into more stories by Reyne in the future.

I think what I expected was a lot of gratuitous sex and not a lot of story. This book is the exact opposite of that. As you read this you fall a little in love with both of these people. You get to dive into their heads and see what they are thinking and how they react to everybody and what all the people around them expect of them as gay men. When I read this I see two guys. Two hot guys who just happen to like guys instead of girls. You don’t get the whole stereotypical flamboyant gay guy who is more of a sidekick character. You get a real man. Real men. That is so refreshing so see in print.

And the story is not just a throw away part of the book either. It is amazing and it really keeps you interested. I enjoyed the slow burning romance between the two agents but it was the story that kept me reading. These two agents, their job and their romance and how they manage to pair the two is just key to the success of this book.

Agent Irish, Aiden Talley is hurting after the death of not only his husband, Gabe but his partner, Tom in the FBI was also killed in the same car accident. Eight months later he is still reeling and gun shy about getting involved in another relationship. The department forces a new partner on him who is not only younger by twelve years but also a previous NBA super star and now a cyber security expert. Not to mention Aiden believes he is straight. So he needs to keep his hands off of him.

The story and the romance paired together make this one excellent read. Highly recommended.
Posted by Toni at 10:46 AM