The Jumpgate by Robert Stadnik 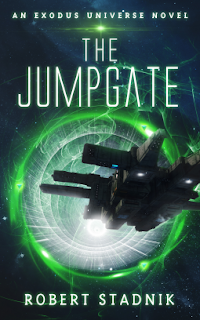 The Jumpgate (Exodus #6)
by Robert Stadnik

Goodreads synopsis:
After being trapped within the solar system for nearly a century, humanity is finally free to explore the galaxy. But questions still remain about the aliens that oppressed the human race. Where are they from? Why did they come to the Milky Way galaxy? The opportunity to uncover those answers finally presents itself. But is anyone brave enough to go through...the jumpgate.

This novel is part of the exodus universe.

There are a number of books before this one in the Exodus universe. There is a huge backstory about a starship named PHOENIX that is barely hinted at in this book but we get enough of a gist to know that some serious crap went down making the crew of this ship not the most favorite of the TERRA people. Earth Security people began taking over key positions in TERRA after the PHOENIX starship returned victorious from its last mission. This has put a wedge between the PHOENIX crew and TERRA.

They have been fixing up the starships in order to do a better check of space in order to keep humanity safe. The SOLARA is the youngest ship. It has thus far had 25 years of service and had to be completely retrofitted in order to contain the alien tech integrated in the systems due to the upgrade.

Commander Jacob Diego used to serve on PHOENIX and now prefers working on a capital vessel due to personal reasons that aren’t immediately told to the reader. He is coming in as the XO Executive officer. Sort of like the second in command to the Captain. I would consider him to be the main character/protagonist of this multi-person story.

Captain Dewis is old school. He doesn’t want the new holographic technology recommended by the chief engineer Lieut. Jonas Walters. He is going into this knowing that he will never have command of another ship considering his age. And he wants to go out in a blaze of glory.

David Block, also from PHOENIX, works in the area of communications. He is estranged from his family due to the animosity toward the PHOENIX crew leading to his father being laid off. There are a lot of hard feelings there and David tries to cope by staying away from the other crew members. The only person he can tolerate is the lone alien on the ship named Fotell. She is a Senfo and not exactly the most popular member of the crew even though she appears sweet and full of light.

When the SOLARA is nearing completion of its retrofit, a Jumpgate is discovered. It’s like a stargate from the movie and tv show STARGATE and STARGATE SG-1. It has the odd symbols and everything scattered on the pieces of the metal-like structure. The SOLARA is given the order to investigate the jumpgate but not go through. Captain Dewis, looking for glory and not in the interest of his crew orders them through the jumpgate and into a situation which just might reveal a new enemy to the Milky Way galaxy.

There are a lot of people in this book and a heck of a lot going on. It would probably be best to start from the beginning at book one of the Exodus universe in order to keep it all straight. I am still a little iffy on a few terms like TERRA. I didn’t have a good grasp of backstory but the more you dive into the story the more it makes sense.

Even with all that is going on, I thought the resolution of the story wrapped up too quickly. Considering the Jakoby was this new big threat, they seemed to defeat them pretty easily.

I thought this book could have been added to and made into a another book with this same crew so we all could get used to who everyone was. But I figure that is not to be. I did enjoy this book and look forward to reading up on more of this universe’s backstory.

I received this as an ARC (Advanced Reader Copy) in return for an honest review. I thank NetGalley, the publisher and the author for allowing me to read this title.
Posted by Toni at 11:52 AM