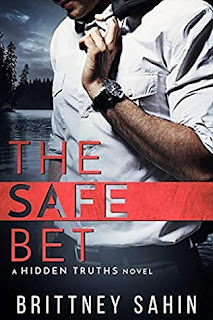 Goodreads synopsis:
She's there to plan the veterans military ball — not to fall for the Marine in charge.

Michael Maddox thinks he has his life under control. No attachments, no relationships — he's too busy transforming his knack for military intelligence into a multi-million-dollar enterprise. But when headstrong event planner Kate Adams comes barreling into his life, everything changes.

From the moment she arrives in Charlotte, Kate is tongue-tied by Michael. She's never fallen for a client before, but then she's never had a client like him — sleek, hard, and impenetrable as steel.

While Kate struggles to keep her distance, a stalker sends her tumbling more deeply into Michael's world. The former Marine is equipped and willing to protect her, and yet Kate finds herself growing more terrified than ever in his care. For as they grow closer, she realizes that Michael has his own secret past. And while he might save her life, he will surely break her heart.

This is the first book in the Hidden Truths series by Brittney Sahin.

This sort of book is right in my wheelhouse. Romantic suspense is my jam, my guilty pleasure. So how could I not love this? According to the author this was her first book and all I can say is WOW! Can I write a first book this good?

Kate Adams is an event planner and the sister of a millionaire asks her to plan a fundraising event to benefit the veterans of which Michael Maddox had been during his time in the service. There were many references to Superman and Man of Steel in this book so it gave me a good idea what Michael looked like during the course of the book. Michael has fired a few event planners before Kate. But there is just something about her that makes him accept the event and assist with the planning.

Michael was not only in the military but he created technology that made it easier for the government to do their secret spy jobs. Suddenly Kate has a stalker following her and a father pressing her to leave Charlotte where her mother had died supposedly during childbirth. This pulls Kate into Michael’s world and he is bound and determined to protect her. When they discover the identity of the stalker, everything changes and they realize just how their lives are in jeopardy.

This book really keeps you guessing and causes some pulse pounding moments. You just can’t put this book down and must discover what is going on. At least, if you’re me, that is how I sped through the book. I had to know.

Other reviewers have said how different this book was to others in this series. I agree it is a bit different but different isn’t bad. This is the first book. And from this book you learn to expand to other books in the series. Book two is about a bar owner who knew Michael from the military. Not everything is going to be the same. In the Stealth Ops series it is more cohesive because you know what to expect and know the team. Here the team is revealed in each book. Different but still good. I truly enjoyed book one in the Hidden Truths series and have already purchased all books in the line up.

Highly recommended.
Posted by Toni at 7:43 AM