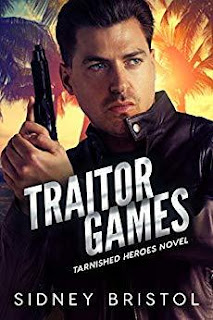 Noah White has done a lot of bad things for the CIA, but this time they've crossed the line. He knows the kill order he's been given is a set-up and the intended target is another covert agent. They’ve finally found a line Noah won’t cross. Not with her.

Lillian Matthews is living in the crosshairs and she knows it. While her friends are spread out over the globe gathering intelligence on a rogue covert agency, it's her job to keep them all connected. Only now she's the target. And her unlikely ally is the last man she'd expect.

Lillian will have to make the biggest sacrifice of her life, because Noah will stop at nothing to protect her.

This is the third book in the Tarnished Heroes series by Sidney Bristol.

I feel like this is an ongoing series that jumps from one book to the next. Since this is book three in a series, there is a lot of back story that is missed. So, if you want to know everything that is going on, pick up books one and two first.

This story has a heck of a lot of cast members milling around. It basically focuses on Lillian Matthews and Noah White but you need to get familiar with them all because they keep coming back up. This is a fast-paced novel that doesn’t let up for one second. Noah is not exactly the boy next door, more like the assassin next door. He is full of complex emotions and frames of reference that no one can really understand if you are not in that type of CIA-esque work. Lillian is the glue that keeps all the teams together. She is the handler and I was surprised a handler was so involved in the lives of her agents. It is like Buffy just hanging out with Giles or Sydney Bristow besting besties with Arvin Sloane. Just plain odd, if you ask me. But in this respect it really works.

Most of this story, all the intelligence, is totally over my head and probably over the heads of most Americans who don’t make it their job to keep tabs on all the bad guys of the world. This was a mind melter for me. I had no idea how this group of seventeen or so operatives could get themselves out of the hot water they had so readily jumped into to save the butts of the American people. There is a conclusion at the end but I felt it was a bit open ended since I assume a new book will come after this one.

The action is top notch and keeps you interested all the way through. There is a bit of sex but it is tame, more like a normal romantic suspense novel. My heart was clutching through most of this so it keeps you engaged too. Definitely pick this up if you like your romance filled with covert ops.

I received this as an ARC (Advanced Reader Copy) in return for an honest review. I thank NetGalley, the publisher and the author for allowing me to read this title.
Posted by Toni at 7:07 AM