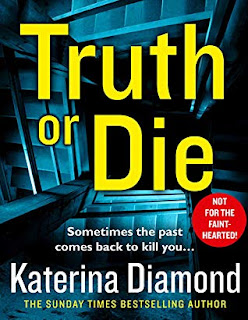 The butchered body of a professor is found in a private office of Exeter University. It is the first in a spate of horrific murders that shakes the city to its core.

Who would target a seemingly innocent man, and why? DS Imogen Grey and DS Adrian Miles turn to his students for answers, but their investigation turns up no leads. Someone must know more than they’re letting on…

As the body count rises, the police have to look into the past to uncover the person responsible before it’s too late.

But are they brave enough to face up to the truth?

This is the fifth book in the DS Imogen Grey series.

This is basically a British police procedural type of story. Think Midsomer Murders. It has that feel but with a female lead. I thought this was great. I am really liking these British dramas lately. They are really ringing my bells.

This story is about a group of professors who are playing a dangerous game and using students as pawns. It is very sad really. Very disturbing at how unaffected these people are while playing with people’s lives. Add to that mess the fact that a serial killer named Parker is back from previous books. He plays a part in this but didn’t really start anything. The teachers had drawn his girlfriend into the possible pawn mix and he went after them to protect her.

Then DS Adrian Miles, Imogen’s partner has a bit of a problem with telling the truth. He knows of Parker's involvement but keeps quiet. Imogene knows a bit of what is going on and he is even lying to her. Adrian and Imogen do become closer during this time which puts an urgency to the mix when Adrian goes missing at the end of the book.

This book really kept you hoping. I am pretty sure I didn’t explain it all very well but you will just need to read this to fill in any of the blanks I have missed. Quite an excellent police procedural and I plan on reading all four of the previous books in this series since I am so intrigued.

I received this as an ARC (Advanced Reader Copy) in return for an honest review. I thank NetGalley, the publisher and the author for allowing me to read this title.
Posted by Toni at 7:57 AM