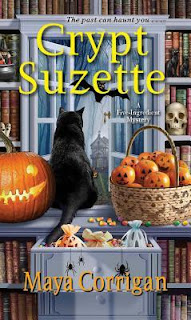 Goodreads synopsis:
Val Deniston is catering the debut of Bayport's newest bookstore--but the death of a customer is about to draw her into a real-life murder mystery ...

Suzette Cripps has been occupying a spare bedroom at Val's granddad's house while she takes classes in this Maryland Eastern Shore town--but she's always seemed a little secretive and fearful, and any talk about her past is a closed book.

After winning the costume contest at the Halloween-themed bookstore party, Suzette is mowed down by a hit-and-run driver--and Val and her grandfather start to wonder whether it was really an accident or if someone was after Suzette. Granddad is a little distracted by his new enterprise as a ghost-buster, but as Val talks to Suzette's coworkers and fellow creative writing students, she grows more convinced that the dead woman's demons weren't imaginary--and that she needs to rip the mask off a killer ...

This is the sixth book in the Five-Ingredient Mystery series by Maya Corrigan.

Val Denston and her grandfather live together in Bayport and have a lady (Suzette) staying with them who is down on her luck. That is my own speculation. Suzette is a writer and spends time with a writing group called the “Fictionistas.” Val’s grandfather was a bit lost after the death of his wife and came out of his stupor by writing a recipe column for the local newspaper using edited versions of Val’s recipes. Suzette kept to herself and seemed to be hiding from the world. She had recently changed jobs and when she goes out running one morning she is mowed down by a hit and run driver.

This story is centered a lot around the bookstore run by Bram and his mother where the Fictionistas meet. Suzette’s mystery story has a strange similarity to her death. Bram is a tad involved in the story since he seems to like Val. At first it felt like he might be a recurring character but I feel like he will be a mainstay in future books. I wish there had been a bit more of him in the story. I was fascinated by his non-relationship with Val.

The grandfather, Don Myer is a hoot and a half. He meets a bunch of people on a haunted house walking tour where they think his house has a resident ghost. He sets them all straight saying what a ghostbuster he is and the tour guide gets a bit grumbly. Too funny.

The mystery is pretty complex and enjoyable to follow. But the star of the book is all the characters and the warm and inviting town. That alone will make you want to check out the previous five books in this series. I am excited to dive into those but I, personally, am most looking forward to more Bram and Val interactions.

I received this as an ARC (Advanced Reader Copy) in return for an honest review. I thank NetGalley, the publisher and the author for allowing me to read this title.
Posted by Toni at 9:54 AM